I am sure that many of you have been following the stunning events in Japan: earthquake, tsunami, meltdown. Our first personal reaction to such events is always concern and sympathy for those swept up in the ongoing human tragedy. The first LDS institutional response, when resources are available, is to forward relief supplies and helping hands to those in need of assistance. But at some later point comes personal and institutional reflection. Is this just the sort of natural tragedy that happens from time to time, or is it a divine sign of the end times? Or both? 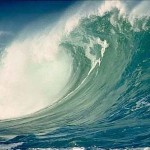 I am inclined to the natural tragedy view. Some reflective people class such an event as “natural evil,” one branch (along with moral evil and sometimes institutional evil) of the philosophical problem of evil. However, despite reading several books on the topic, I can’t quite internalize the problem of evil. Pairing “evil” with “nature” seems improper to me. We live in a universe and a world governed by the operation of physical laws. Placing a moral evaluation on a natural event seems like a category mistake. Natural events can be tragic for individuals and communities, even on an epic scale, without being evil.

In a similar vein, here’s what I wrote about a year ago in a T&S post titled Beliefs and Causes (with dead links removed):


Take earthquakes. Plate tectonics explains how chunks of continent and sea floor very slowly move, how stress builds at plate boundaries, then eventually releases in earthquakes at faults. We now have a good understanding of the natural processes involved, and seismographs show that for every earthquake felt by human observers there are thousands of tiny quakes and tremors that we would never notice but for these instruments. At the same time, many feel God must somehow be part of the process, at least for big earthquakes that make the news. But if you let your belief in God become mixed up with your sense of what causes earthquakes, you might end up sounding like this recent AP story. First line: “A senior Iranian cleric says women who wear immodest clothing and behave promiscuously are to blame for earthquakes.” Or this LA Times opinion piece, which notes, “The evangelical Christian Pat Robertson suggested that … that this year’s earthquake in Haiti was part of a curse on that island stemming from an 18th century pact with the devil that Haitians allegedly made in exchange for liberty from French slave owners.” [Mormons leaders are more circumspect — we just send food and shelter.]

Of course, there are other credible LDS views on earthquakes, tsunamis, and natural disasters. In an April 2004 Conference talk titled “Preparation for the Second Coming,” Elder Dallin Oaks included earthquakes as one of nine signs of the Second Coming, then commented:


These signs of the Second Coming are all around us and seem to be increasing in frequency and intensity. For example, the list of major earthquakes in The World Almanac and Book of Facts, 2004 shows twice as many earthquakes in the decades of the 1980s and 1990s as in the two preceding decades (pp. 189–90). It also shows further sharp increases in the first several years of this century. The list of notable floods and tidal waves and the list of hurricanes, typhoons, and blizzards worldwide show similar increases in recent years (pp. 188–89). Increases by comparison with 50 years ago can be dismissed as changes in reporting criteria, but the accelerating pattern of natural disasters in the last few decades is ominous.

To his credit, Elder Oaks is not saying God is causing the earthquakes, but not all commentators are as careful in their phrasing as Elder Oaks. There is, strictly speaking, nothing inconsistent with viewing earthquakes as natural events and also viewing them through a religious lens. But there are many angles through that religious lens — the only one I really like is the LDS response of sending relief supplies and helping hands.

[For another personal commentary on this topic, read Wilfried’s T&S post “Tsunami” from 2004.]