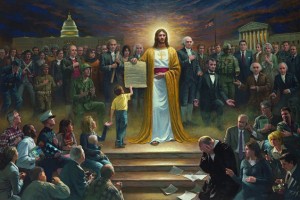 The news yesterday that artist Jon McNaughton had pulled his artwork from the BYU Bookstore led me to ponder once again the influence that Church-owned businesses and institutions have on Mormon Culture. While these institutions seem focused on how what they carry and produce reflects on themselves and, ultimately, the Church, I worry that the variety of books, art, music and other Mormon cultural materials aren’t as available as they should be.

McNaughton pulled his art after the BYU Bookstore stopped ordering his controversial but strong-selling painting One Nation Under God, which BYU professor of art Jennifer Barton, in yesterday’s Deseret News article, calls a propaganda piece for the tea party. While BYU spokesperson Carri Jenkins says this was a bookstore decision, McNaughton suggests that it was BYU’s administration that decided the work wasn’t acceptable. He told the Salt Lake Tribune, “I think [BYU] is trying not to offend the few liberals on campus.”

Regardless, the bookstore has apparently sold thousands of copies of the popular painting, which not only depicts Christ holding the constitution, but also gives a positive nod to Cleon Skousen’s “The 5,000 Year Leap” and portrays negatively an anonymous supreme court justice, the Marbury v. Madison supreme court decision and Charles Darwin’s The Origin of Species, among other things. Former BYU Bookstore art and frame department Val Ugolini told the Deseret News, “I couldn’t keep it on the walls. No matter how much it would cost, from $50 to $5,000, we were selling it like bread.”

If Ugolini is right, then the bookstore’s decision to stop carrying this work isn’t exactly about making money. Even taking at face value Jenkins’ assertion that this was a bookstore decision, the decision is more about appearance, and perhaps how that overall appearance might affect profits (though I kind of doubt this last part).

Whose appearance? At the least, the issue is how this work reflects on the BYU Bookstore. But likely the bookstore’s decision makers are also worried about how it reflects on BYU and on the Church. General Authorities have repeatedly told the BYU community that what they do reflects on the Church, just as they have often told the membership of the Church the same.

What makes all of this worry over how things reflect on the Church difficult in my mind is the influence that the BYU Bookstore has in the campus and LDS marketplaces. The reverse of whether or not a product sold in the bookstore reflects badly on the Church might be whether or not it is approved of by the Church — and to some degree that is the perception (erroneous in my opinion) of a portion of Mormons about what is sold in the BYU Bookstore, and, to an even greater degree, in Deseret Book.

When this kind of influence exists, there is a very clear danger to the weakest products, to the more unusual items and to the most radical and innovative works, regardless of how faithful or how acceptable they may be to the Church. If the companies and institutions with this influence don’t carry a work, does that mean that it isn’t financially viable? or does it mean that it would “reflect badly on the Church?” And regardless of which of these is the reason, how will I, the consumer, know?

In the case of the BYU Bookstore, I’m not as worried about this influence in Mormon Cultural items. In my experience the bookstore has been much more open to new works, academic works and the unusual than Deseret Book and most other stores that carry LDS products. As an academic bookstore, that’s no surprise. Deseret Book, on the other hand, dominates the LDS market to such an extent that if a work isn’t available there, it might as well not exist for most LDS consumers.

But, in McNoughton’s case, I worry that the bookstore is defining this as “reflecting badly on the Church” when it should not. Those who know me and my sentiments as expressed here on Times and Seasons know that I don’t care for McNoughton’s ideas. I think some of what he is saying in One Nation Under God is simply wrong, and somewhat offensive. [For what its worth, I also think his art is atrocious — but that’s more a matter of taste.] But in my view one valid purpose of art is to provoke and perhaps, in doing so, even offend. [Professor Barton should know this, shouldn’t she?] Besides, how can I object to McNoughton’s “behaving badly” (in my view), when I recently advocated for Mormons knowing about those who are doing much worse!

So, were I the decision maker at the BYU Bookstore, I would hold my nose and stick the painting on the wall, selling as many as I can. [If anyone asked, I’d have to be honest about how I feel about the work]. But, I’m not and I can also see the other side of this issue. I also don’t want people to think that the Church approves of his artwork!

Nor can I manage much sympathy for McNoughton — not when I suspect that neither he nor most of those who like the ideas expressed in One Nation Under God are likely to be as understanding of works on the other side of the political spectrum, or even of those works that are simply unusual, radical or innovative.

← Heller is Senator: Appointment makes 6 Mormons in U.S. Senate
On the Proper Usage of “Policy” and “Doctrine” →