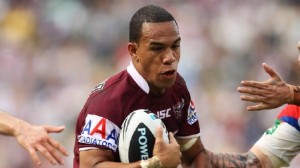 In the first talk given during the Priesthood session of this past General Conference, Elder Neil L. Andersen told the story of New Zealand rugby player Sid Going, who, in 1962, was poised to become a major Rugby star. But Going instead chose to serve an LDS mission, and became a star anyway when he returned two years later.

Now, less than six weeks after Conference, Australian LDS Church member Will Hopoate has chosen to follow Going’s example, forgoing interest from 6 teams and at least one offer worth USD $1.6 million.

Will Hopoate is the son of John Hopoate, himself at one time a star for the Manly-Warringah Sea Eagles. The elder Hopoate, a Tongan-born LDS Church member, played from 1993 to 2005, and was one of the NRL’s leading scorers. But John Hopoate also left a trail of scandal, becoming the “most suspended player of the modern era” (according to the Sydney Morning Herald in 2005). Following his retirement from Rugby, John has become a professional boxer.

His son, Will, in contrast, shows little interest in scandal. He has told newspapers that he is “deeply religious.” With reporters and teams looking for information about his plans, the younger Hopoate hinted at the possibility that he would serve a mission in recent weeks, telling the Sun-Herald, “missionary service is something I’m taking into consideration. I’m weighing up my options but it’s important to me.”

He played for the Sea Eagles in both 2010 and this year, and the Sea Eagles have a better record this year than last. Will is under contract through the end of this season (the Grand Final game will be held October 2nd), and it seems likely that his missionary service will begin soon after.

The Sea Eagles have been kind in their reaction, despite the fact that they were “desperate to retain him.” Chairman Scott Penn said the club supported their young star’s decision. ‘‘We’d like to congratulate Will on a strong decision,’’ Penn said. ‘‘We certainly support you, you have been an integral part of the Sea Eagles family. We’ve loved watching you develop and certainly would very much like to see that continue so we’d very much like to see you come back once you’ve fulfilled your mission.’’

[From what I can tell, Rugby has the fourth highest number of professional players who are Mormon, behind football, baseball and basketball.]