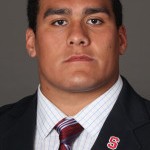 This past week three Mormons were called to spend their Sundays during each fall in pursuit of goals quite different than those of most other Church members. In their battles they will face “violence, punctuated by committee meetings.” But none of these three hail from the traditional preparation centers for Mormons.

No, these three Mormons went to Stanford and USC, and they were drafted into the NFL.

It is perhaps a bit surprising that the traditional Mormon football schools, certainly BYU and Utah, if not also Utah State, Weber and other schools in the Mountain West, didn’t produce anyone who was drafted this year.

One of the three, Sione Fua, a defensive tackle who played at Stanford, is a returned missionary, although he returned after serving for just a year. Still, the mission was important to Fua, who made an issue of missionary service when he was recruited and turned down USC because they wouldn’t keep his scholarship through a mission. Fua was drafted near the end of the 3rd round (97th overall) by the Carolina Panthers.

At the beginning of the next round (102nd overall), the Cleveland Browns drafted Jordan Cameron, who may be familiar to BYU fans as a point guard on the Cougar basketball team in 2006-7. Thinking he would try football again, he tried to transfer to USC, but ended up spending a year at Ventura College because all his credits from BYU wouldn’t transfer. The Trojans moved Cameron from wide receiver to tight end and he flourished there, catching 16 passes and scoring a touchdown in his final year.

Jordan’s teammate Stanley Havili came close to earning the dubious honor of “Mr. Irrelevant” – the last player chosen in the draft. He was taken by the Philadelphia Eagles as the 37th pick in the 7th round (240th overall). Like Fua, also struggled with the mission vs. play football decision, eventually chosing USC in spite of their inflexibility towards LDS missions. And Havili thought about serving a mission in spite of USC’s policies, but eventually deciding to stay and pursue his career.

As far as I can tell, these are the only Mormons chosen in the NFL draft this year. This fall they will join about 30 other Mormons playing in the NFL. Of course, it could be that I’ve missed someone. If I have, I’m very interested to know.

BTW, the WNBA also held their annual draft in April, but as far as I can tell, no LDS players were chosen — perhaps because the colleges and universities that traditionally draw LDS students don’t have top-ranked women’s basketball programs. I only know of one LDS player who has made the WNBA.

7 comments for “Called to Play”