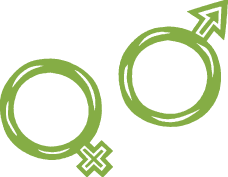 Gender is an essential characteristic of individual premortal, mortal, and eternal identity and purpose.

~ The Family: A Proclamation to the World

Gender is part of who we are and who we have always been. It is important. It matters. The church uses gender to delineate authority, callings, and roles:

~ The Family: A Proclamation to the World

Last night my third daughter graduated from seminary. On the back of the program, I noticed all those in the seminary “chain of command” for her seminary program. There were 24 people listed from the Timpanogos Region Board of Education, the Utah Valley North Area, the Church Educational System Executive Commitee, and The Church Board of Education.

Of those 24 people, two were women. (Those two women — Sister Julie B. Beck and Sister Elaine, S. Dalton — were the only people listed without an official title or position. But that’s another post.) In her four years in seminary, there has been one female seminary teacher in her school’s program, but she was never assigned to her class. (We live in Utah where “released-time seminary” — with full-time, paid teachers — is typical. The only time my kids have been taught seminary by women was in “early morning” seminary, with “appointed” (and unpaid) teachers.)

If gender matters, if the distinction means so much that we define life roles based on gender and we include/exclude people from callings, actions, etc., based on gender, and we acknowledge deity based on gender — if men and and and women are intrinsically, inherently, eternally different, and that difference really matters — then can a church authority structure comprised almost exclusively of men address the needs of women sufficiently?

For the record, the general response I hear to similar questions (besides, “Why do you want to be a bishop?” sigh) is, “God is running the church. Of course he can provide men with the needed insight to serve women.”

While I agree in theory, I don’t generally think God poofs most of us with knowledge, wisdom, and insight we haven’t earned or learned. And I don’t think men generally understand women as well as they understand men. I’ll give an example.

A few years ago (2003?), when I was serving in the Young Women leadership in my ward, I went to Salt Lake for the annual auxiliary training meeting on Temple Square. (Unfortunately I haven’t yet unpacked my notes on this, so I will leave out names until I can be sure my memory is correct.)

One of the featured talks was given by a member of the general Young Women presidency. It was held in the chapel of the Joseph Smith building. The woman told how she had been in a meeting with a member of the quorum of the 12. She got up to leave and as she was going through the door — and as some other general authorities entered — the apostle said (paraphrasing until I can get the exact wording), “Now we can get down to the real business of the church.”

The woman said she turned back into the room and called him out on the statement. And he apologized profusely.

It was interesting to see the response to this story. At hearing the statement from the apostle, there was a collective intake of breath from those in the congregation. At the retort, there was laughter. And there was furious scribbling all around. My reaction was mostly astonishment that, in such a setting, the woman would actually share the information!

I honestly don’t remember the Young Women leader’s point in telling the story, but I think it’s germane to this discussion.

If an apostle — someone active members (myself included) would generally agree is a deeply decent, honorable, spiritual man who is (if anyone is) getting spiritual insights about church members — can so easily dismiss the importance of women’s issues in the church, isn’t it likely that they are dismissed by “regular” male leaders fairly regularly? And if there are so few women to bring these issues to the forefront and to show their significance, isn’t it likely that many simply won’t be addressed?

← Who reports crimes confessed to a Bishop?
The New United Order →

286 comments for “Does Gender Matter?”