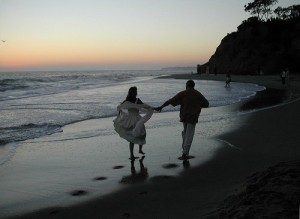 The topic of sex and the Mormon single is a perennial favorite in the bloggernacle, and recently it has drawn national attention as well. No treatment of the topic would be complete without a look at the Duck Beach phenomenon, an informal annual gathering of east coast LDS singles in North Carolina that is equal parts Jersey Shore and Temple Square. LDS filmmaker Stephen Frandsen (my cousin) and his production company Big Iron Productions have trained a thoughtful lens on this singular affair, and are currently in the process of financing and producing a documentary exploring its relevance.

We’re pleased to share an interview with Stephen Frandsen here, and we invite readers to add their own experiences with or impressions of Duck Beach in the comments. The filmmakers are actively seeking further participants who are willing to share their stories, and they will be pleased to respond to questions in the comments here.  Finally, please do consider donating to the project via kickstarter, a unique online instrument for grassroots funding of interesting and worthwhile projects  — of which we expect you will fully agree this is one!  (Stay tuned after the interview for a bonus extra: “One Way Ticket,” a charming documentary short made by Stephen that follows one man’s journey through online dating to a surprise twist ending.)

RW: What drew you to Duck Beach as a subject, and why documentary rather than a fictional feature?
SF: With outsiders to the faith, whenever I bring up the fact that I’m a single Mormon, a barrage of questions follow. Not only the sex questions (Are you a virgin? What is or isn’t allowed?), but also many sincere questions about Mormonism.  At least here in New York, I’m often the only Mormon people have known personally.  So, a story that not only talks about sex and chastity, but also discusses how to be faithful in Modern America definitely has legs. Why a documentary? A feature that tells this story wouldn’t be believable.  It’s almost too strange for fiction.

RW: Describe the backgrounds of the directors and producers, and how you came together and work together.

SF: Hadleigh Arnst is a producer at an ad agency here in New York.  He produces television commercials.  We started working together a couple of years ago, and recently started Big Iron Productions together.  Besides my Big Iron work, I freelance on commercial sets.  Laura is a photographer and filmmaker making work in New York City and abroad.  Hadleigh is an outsider to the faith, but with a pretty strong knowledge of both the culture and doctrine.  Laura has moved away from Mormonism, but has been active in the Mormon Singles’ scene, so provides a valuable insight.

RW: How are you financing the film, and what is your plan for distribution?

SF: Up to this point (for our research and preliminary shooting) we have self-financed.  For the production portion, however, we are using Kickstarter.  It’s a great way to give people the opportunity to be involved in the filmmaking process.  They sort of take ownership of part of the film, and get rewards for doing so. Also, we have found an investor in NYC who will match the money we raise on Kickstarter.

Our goal is to then submit the film to the major film festivals. Which means a frantic summer of editing, with some sort of draft ready to submit by late August.  We’re probably looking at over 100 hours of footage, which is a daunting task to confront and organize.  So, the money will help us find people to work on that.

RW: The film follows four principal characters, each very different and each representing a certain type of Mormon single. How did you select the four, and why?

SF: What we have found in getting to know our four different subjects is how wonderful they each are.  I know that sounds trite, but they really are interesting, great people.  And each has a unique story.  Initially, we made our selections to show the our wider (not Mormon) audience how varied and different the Mormon scene is.  And when you first meet them, you are likely to make certain assumptions about who they are and what they do; however, I’ve found that as we’ve interviewed them and learned about their life history, those first assumptions I’ve made have completely changed.  That’s what I love about documentary film making.  So many times in life, you have conversations that are half-baked and insincere.  But, when you pull out a camera, you have license to ask intimate questions, and people are willing to share.  And, (Warning! I’m about to sound trite again) through the process, I’ve felt my faith in humanity and to some degree the church, strengthened.

RW: Does the Duck Beach phenomenon teach us something about singleness and the Mormon marriage market more broadly, or do the particular circumstances of the event make it a totally unique social situation?

SF: To some degree it’s a microcosm of Mormon single life. Obviously, it has its differences. And there are a large number of single Mormons who do not like Duck Beach at all. Either way, the interesting thing about Mormon Single parties (at least here in New York) and I think at Duck Beach, is that you have a large group of people thrown together in a traditional social situation who only have Mormonism in common. So, it makes for some awkward evenings, and some incredibly interesting and fascinating times.  You have financial analysts and lawyers mingling with designers and musicians.  There’s always something new to learn, or there’s always something off-putting.   Add to that the pressure to find someone to date, and you have some built-in conflicts that make a great story.

RW: Who is your intended audience, Mormons or non-Mormons? How much basic “meet-the Mormons” explanatory work will you do?

SF: Wikipedia has changed the way we tell stories as documentary filmmakers. One of the things I admired about Big Love was how little Mormon explanation they gave.  They jumped right into it: characters talked about Young Womens and Choosing the Right with no explanation.  Our goal is to follow suit.  We want the film to be about the people and the situation.  Mormonisim provides the context, but the film is about our four wonderful people. Stopping to explain every single Mormon word they use will get laborious.  Let the viewers go to other sources for Mormonism 101.

That being said, we are making the film for the broader American audience.  Not as an expose, but as a way to tell a great story that include the universal themes of religion and dating. Add to that the fact that a couple of Mormons are running for President, and that a Broadway play about Mormons is running away with Tony awards, and we find ourselves in an ideal time to tell a Mormon story.

RW: Finally, the question we all want to ask: who has it worse at Duck Beach, the girls or the guys?

SF: To answer this question, I will share the ending of an actual Duck Beach email invite.

Thank you, Stephen! Enjoy “One Way Ticket”, and then share your experiences with the Mormon single experience at Duck Beach — or anywhere! — in the comments.

← Increasing Agency, and the Healer
Making Mormons in the 21st Century →