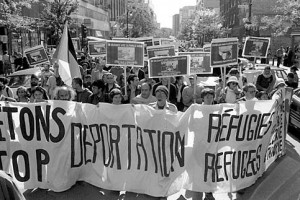 When I was on vacation a few years ago I picked up a local paper and found a number of articles about the problems that area was facing because of illegal immigration. Predictably there was crime committed by the illegal immigrants, and a lot of hate towards them. For an American nothing there was unusual–except that I was in South Africa.

Most of these migrations come simply from economic disparity. This economic issue is troubling, in my opinion. Somehow (and this applies to everyone involved) we are more concerned with preserving our economic status than we are with the welfare of our neighbor. We are concerned with “laying up for ourselves treasures on earth” than with building those we would have in heaven.

I was reminded of the international nature of the immigration issue when I read the Church’s most recent immigration statement, issued Friday, which said:

The history of mass expulsion or mistreatment of individuals or families is cause for concern especially where race, culture, or religion are involved.  This should give pause to any policy that contemplates targeting any one group, particularly if that group comes mostly from one heritage.

Yes, while the economic motivation of immigrants is left out of this statement, the unfortunate effect of the reaction too often ends up fostering hate towards those of specific races, cultures or religions. This hate is indeed a troubling issue.

As a teenager in the early 1970s, as I became politically aware, one of the chief concerns in the U.S. over immigration wasn’t those coming into the U.S., but those who were trying to leave communist countries. Would-be immigrants were shot trying to cross the Berlin wall, or recaptured and sent to “re-education” camps in countries in Southeast Asia and China. Conservatives railed at these countries for building walls to keep citizens in.

Of course the situations are very different. I don’t want to equate fleeing the economic oppression of most communist countries with simply fleeing poverty. As is often the case when we look at history, the parallels are not quite right, leaving us either uncertain or sure that the historical examples don’t apply.

I think there is something to be gained by looking at the immigration issue from both an international perspective and from an historical perspective. Perhaps those perspectives will help us understand the Church’s position on immigration.

20 comments for “Immigration Where?”