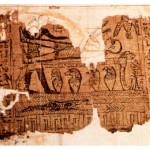 A Happy Father’s Day to all! My day’s been celestially filled with family, great meals, and rainbow drawings/notes from my children. And on top of it all I’ve had the rare opportunity to sit quietly in an idyllic spot and read The Book of Abraham – an appropriate text for Father’s Day if ever there was one.

In reading and talking through some of the verses with my wife – who already seems to have the great knowledge and the greater knowledge that I, like Abraham, seek for – we spent some time on that conspicuous word that pops up over and over again: fathers. Now I’ve no idea what language the Abrahamic scroll was originally written in, nor even what the linguistic and cultural conventions of later Egyptian implied. However, I have a middling knowledge of Hebrew (greatly supplemented by my wife’s much better grasp of the language), and in Hebrew, as in other related languages from the region, the word we commonly see translated as ‘fathers’ is avot – a plural ending (-ot) attached to the singular father (av). Similarly, the plural for mother is imahot. The plural for a mixed crowd of “ancestors,” however, is simply avot. Thus, the word when it appears in scripture is ambiguous.

The same is true for lots of plurals, in ways that are significant to us today. Take ‘children’ for example (benim), which is the same word used for ‘sons’ – that is ‘son’ (ben) with a plural ending (–im). Consequently, when in Exodus 40:12-15 the Lord tells Moses to bring Aaron and his “sons” before the door of the tabernacle to wash, anoint, and clothe them in the robes of the priesthood, the word used is a grammatical construct of benim and hence ambiguous as to whether the Lord is referring specifically to Aaron’s sons or more generally to his children collectively[1] – a fact that ought to alter the way we think of our initiatories, administered today both by and to men and women. We know how later Israelites interpreted the Exodus 40:12-15 injunction, but that’s not always a good indicator of how it was originally intended or interpreted. (For example, later Israelites interpreted their religion as forbidding women from the inner sanctuary of the temple, but as the scholarship of the Dead Sea Scrolls and other ancient texts – not to mention the restored gospel – makes abundantly clear, women were originally and ought now to be participants in the inner sanctum of the temple. There are lots of reasons not to make the interpretations of later, apostate remnants our default when it comes to women.)

At any rate, I feel confident that it is and would have been culturally, and perhaps even linguistically appropriate to read “ancestors” into Abrahams search for the blessings and rights of his “fathers” – particularly since we’re dealing with the temple in these passages of scripture. But the point of all this is not a pedantic linguistic speculation – especially given my candidly acknowledged status as dilettante! Rather, I wanted to share what was for me today a poignant fatherly insight – one of those tender mercies from heaven that helped me better understand what it means to be a father and to have inherited the blesses and covenants of my “fathers.”

On a related note, while the irony of taking our greatest hymn in praise of Heavenly Mother and renaming it “O’ My Father” is not lost on me, it strikes me as a perfect song for Father’s Day – one that encapsulates what I hope was expressed somewhere in this post. “O’ My Father” reminds me that in honoring my father on this day or in receiving honor from my children, I inherently acknowledge and honor my wife and my mother. It reminds me of the intimate and exalted coupling after which Abraham sought and all of us seek.

[1] Translators of this one always take the context of ordaining priests to disambiguate the word and translate it as ‘sons’ – but I think this just pushes the analysis back one level and doesn’t actually answer the question.

← The Parable of the Talents: Embracing the power of imperfect actions
Objective Measures →

4 comments for “My Fathers – My Ancestors”