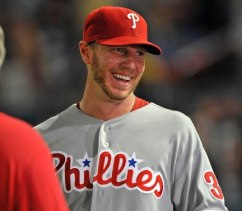 While 13 Mormons are among the 750 active players on Major League Baseball rosters at this point, just two (of 68 players) are on the rosters for tomorrow’s All-Star game. And with one player in each league, there is no clear team to root for in tomorrow’s game.

Baseball fans are likely first to see Phillies ace Roy Halladay first, representing the National League. Halladay (11-3, 2.45 ERA, #8 in the majors) is coming off an outstanding season last year in which he pitched two no-hitters, one of which was a perfect game. This year his statistics have been just as good, with Halladay suffering just one bad outing, on April 19th when he gave up 6 runs to the Brewers in a loss. His performance is a large part of why the Phillies once again hold the best record in major league baseball.

American League fans will have to hope that Boston’s Jacoby Ellsbury, who is on the team’s reserve list, will make an appearance. Since the teams tend to cycle through most of their reserves during the All-Star game, an appearance by Ellsbury is possible. Unlike with the pitchers, position players make the team by popular vote from the fans, and Ellsbury faced stiff competition in the outfield from José Bautista, Curtis Granderson and Josh Hamilton, who won the vote and were named starters. Ellsbury’s performance this year is still stellar, and he goes into the All-Star break hitting .316 (#10 in the majors) and without a fielding error so far this year.