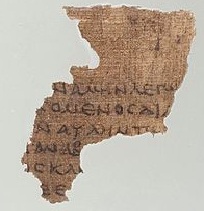 After writing the third (hypothetical and missing) letter, Paul left Ephesus for Troas and continued on to Macedonia, where he met Titus. Titus brought news that the Corinthians had repented and were reconciled to Paul (2 Corinthians 7:5-13), and Paul wrote 2 Corinthians in response. Thus, 2 Corinthians seems to be the fourth letter in the series, written after Paul learned of the Corinthians’ repentance. Paul sent Titus back to Corinth with the letter that we call 2 Corinthians, a letter that included instructions for raising money to aid the Jewish Christians in Jerusalem (2 Corinthians 8:16-20).

There are three main parts to the letter:

These “super-apostles” seem to have been a new kind of Judaizer: wealthy Palestinian Jewish converts, they insisted on reading the Old Testament only allegorically, they claimed special spiritual knowledge, they seem to have argued that Christ’s death made no difference to him because he was just as heavenly afterward as before, and they believed that wealth is proof of righteousness (and, so, denied that we must suffer and sacrifice).

These notes will cover chapters 1 and 4.

Verses 3-4: Given the circumstances in which the letter was written, why is it appropriate that Paul begin by praising Jesus as “the Father of mercies, and the God of all comfort” (verse 3)? What does the word “comfort” mean? How are mercy and comfort related?

What reason does verse 4 give for Paul’s gratitude?

What kind of comfort does Paul offer those who need comfort? How was Paul comforted by God?

The words “comfort” and “consolation” in verses 3-7 all translate variations of the same word, parakale?. Using the noun form of the word, Christ has used that word to describe both himself and the Holy Spirit, “the paraclete.” (See John 14:16; see also 1 John 2:1.) The word means not just “comforter,” though that translation is meaningful and important, but “one who stands beside another,” “an advocate for another.” Does that understanding of the word change your understanding of these verses? What does the promise of a comforter mean to us when we are suffering?

We live in a time that is relatively free from persecution. What might it mean to suffer for Christ today? Can we do so in our personal relations, such as those with our family, ward, or community members?

Here is another translation of verse 6: “If we suffer, it is for your help and salvation; if we are helped, then you too are helped and given the strength to endure with patience the same sufferings that we also endure.” What is Paul saying when he says that if he suffers, it is to help the Corinthians? What does he mean when he says that if he is helped, then they too are helped? Do we see anything like this in our own relations?

In verse 7 Paul tells the Corinthians that he has a steadfast hope for them because he knows something. What does he know? How does that knowledge yield hope? Hope for what?

Verses 1-2: In verse 1, Paul says that he has received his ministry, his calling, through God’s mercy. What does he mean by that? Are our branch and ward callings given to us by divine mercy? What would it mean to say that they are?

How does having received his calling by God’s mercy make it possible for him to be strong?

What might the “hidden things of dishonesty [or shame]” (verse 2) be?

“Craftiness” (verse 2) is the same word translated “beguiled” in 2 Corinthians 11:3. What is Paul talking about? What does it mean to use the word of God deceitfully, in other words, to falsify it? How might we do so?

What does it mean to commend oneself to the conscience or awareness of men in the sight of God?

Verses 3-6: Who are “them that are lost” (verse 3)? Why is the gospel hidden from them? Does it mean that they should not be proselytized? How does Paul explain their loss (verse 4)?

Why does Paul think that he must remind the Corinthians that he is not preaching himself (verse 5)?

What does he mean when he says that he preaches himself a servant for Jesus’ sake?

Paul begins verse 6 with a reference to the creation. Why does he use that reference to speak of his conversion?

Verses 7-12: Who is the earthen vessel, the clay pot, in which a revelation of Jesus Christ has occurred? How does that revelation show “the excellency of the power of God, and not of us” (verse 7)?

The word translated “troubled” (verse 8) means “confined, narrowed.” How is that a good description of what it means to be troubled?

Why is it important for Paul to remind the Corinthians that he has been persecuted (verse 9)? Are any of them, perhaps, among the persecutors?

What does it mean to be cast down (struck down)?

In verse 10 Paul says that he always carries the death of Jesus in his own body. What does that mean? How is Jesus’ death revealed in Paul’s body?

The word “for” at the beginning of verse 11 tells us that this verse explains what Paul has just said. What is the explanation?

“Delivered unto” might be translated as “are in danger of.” Does that help your understanding of the verse?

Given what Paul has just said in verses 10-11, can you explain what he means in verse 12?

Verses 13-15: In verse 13 Paul quotes from the Greek translation of the Old Testament (the version that he and most of those to whom he wrote would have used), Psalms 116:10: “I believed, and therefore have I spoken.” What point is Paul making by quoting that scripture?

In verse 14 Paul tells what he believes, in other words, what he was referring to in verse 13. What does he believe and how is that relevant to the discussion?

How would you describe the topic that Paul has been discussing? Is it announced in verses 1-2? In verses 8-11? Something else? Are the topics of those two passages different or the same?

In verse 15 the King James translators inserted the word “are” after “all things.” (The italics mean that they inserted it; it was not part of the Greek text they were translating.) They thought that would make more sense of the verse. But I think the verse means “All these things are for your sakes, so that the abundant grace . . . .” If I am right, what is Paul saying in this verse? For whose glory does he work? How do “his” converts fit into that purpose?

What does “outward man” refer to? How about “inward man”?

In chapter 11 (verses 23-27) Paul describes some of the afflictions that he suffered: beatings and stonings, imprisonment, shipwreck and being lost at sea, the many great dangers of travel in those days, weariness, pain, sleeplessness, hunger and thirst, cold and nakedness. How can he describe his affliction as “light” (verse 17)? Why does Paul describe eternal glory as a weight? In verse 18, what are “the things which are seen” and the things which are not seen”? What does this verse have to do with the previous discussion?

Elder Neal Maxwell said: “When we take Jesus’ yoke upon us, this admits us eventually to what Paul called ‘the fellowship of [Christ’s] sufferings’ (Philippians 3:10). Whether illness or aloneness, injustice or rejection, . . . our comparatively small-scale sufferings, if we are meek, will sink into the very marrow of the soul. We then better appreciate not only Jesus’ sufferings for us, but also His matchless character, moving us to greater adoration and even emulation.”

What does it mean to take Jesus’ yoke on ourselves? How is suffering related to doing so? According to Elder Maxwell, what is the effect of suffering meekly? Why is adoration important? What would suffering bring us to emulate?

Please respond to this post at Feast upon the Word.