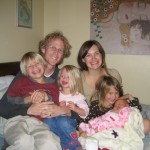 Here’s a second post, responding to issues raised in Alison’s Serving on the Sidelines.

That by reasons of transgression cometh the fall,

and inasmuch as ye were born into the world by water, and by blood, and by the spirit, which I have made,

and so became of dust a living soul,

even so ye must be born again into the kingdom of heaven,

of water, and of the Spirit, and be cleansed by blood,

even the blood of mine Only Begotten;

and enjoy the words of eternal life in this world,

and eternal life in the world to come,

for by the water ye keep the commandment;

by the spirit ye are justified,

and by the blood ye are sanctified.

I love these verses. I love the visceral, embodied symbolism. I’ve been personally moved and affected by the connection they make between the atonement and the two births that we undergo in this life – our physical, mortal birth and our rebirth into the kingdom of heaven. These verses are, I think, among the most theologically rich passages in all of our restoration scripture. I’m even conservative and traditional enough to believe that these verses can help us understand the men-hold-the-priesthood dichotomy we’ve maintained in this dispensation. I’m convinced, however, that just as there is an edifying way to invoke them, there is also a pernicious way. Most often I see the latter. As was brought out in comments on Alison’s post, there are those who feel that these verses articulate a divine ordering of women having babies while men hold and exercise the priesthood and lead the church. In addition to it’s various odious implications, I think this interpretation goes clearly and perniciously beyond the content of the passage.

Briefly: these verses apply to the two births – our mortal entrance into the world and our spiritual entrance into the Kingdom of God. That is, I think they can be insightfully read as shedding insight on how both women and men are involved in and carry out the work of atonement and sanctification as they participate in these two births. Note, however, that there is nowhere in these verses a gendering division of duties – no hard and fast declaration that women and only women are involved in the first birth, while men and only men are involved in the second. We read gender roles into these verses for the obvious reason that women physically deliver babies. I’ll discuss below, however, why even this thin interpolation is problematic, and why I think the lack of gender here ought to keep us from inserting such gender ordering, either in our interpretation of the scriptures or in how we carry these things out in our practical lives. When we go beyond what’s actually in the text, we often go very quickly from a beautiful, proportionate interdependence between men and women and the opportunities they have to concretely administer the grace of salvation, to a very disproportionate and even incoherent (or at least very problematic) set of metaphors with very little grounding in what actually happens in our lives. They do not explain why in addition to performing baptisms, men’s priesthood performs all other ordinances, presides over all church councils, functions and activities, and justifies sovereign councils that in principle require no input from women. That’s the pernicious part – when we read these verses as if they do explain this lack of practical and spiritual balance.

One thing that has made these verses so moving in my life has been, of course, the way reality and the symbols articulated in these verses have mutually informed one another and led to spiritual enlightenment. This is where my very vague and abstract sentences demand a bit of illustration. But that’s the difficult part, especially since I don’t know how to articulate the sacredness of my experiences or my understanding, and am particularly conscious of the way that trying to do so might well alienate or otherwise cause hard feelings for those whose experiences have (perhaps necessarily, perhaps because of choice) been very different than my own. Let me preface what follows, then, by emphasizing that I’m attempting to articulate my own experiences and the insights they’ve brought, not dictate or judge others’ experiences.

My wife and I have (mostly) home birthed, with midwives. Beyond that, I have been the one to deliver three of our four children (and helped deliver the fourth). All of the preparation that goes into a home birth, together with the physical training and preparation that my wife does, leads to a very connected and aware sort of delivery. The natural pain and euphoria of birth has been extremely meaningful to her and yielded an instant bond between her and the infant – one that I’m not really competent to describe.

In what I’ve now said I probably already risk alienating others or giving the misperception of a superiority complex that’s often associated with natural birthing. I don’t want to do that. With that repetitive caveat, however, I’ll move on to my own experience.

My hands literally shake as I remember with vivid clarity the birth of my children. I believe it’s true that my wife presides over and administers the first birth – the mortal birth. But in wonderful, celestial unity I helped conceive the children. Additionally, I read all the parenting and birthing books with her, I attended all the classes with her, and throughout labor we labored together. Note: I don’t mean to attribute any equivalency to our joint labors here, I only want to emphasize that they were just that: joint. Finally, my hands were soaked in water and blood as they caught the new spirit and life that passed from my wife’s body and into my arms. This act – more than any other act I’ve participated in – united my soul with my earthly and heavenly family. These births have been the most cherished and sacred of my mortal experiences.

Consequently, I’m reticent to share it here. But I think it illustrates the way in which Moses 6:59-60 ought to be interpreted. It’s simply not the case that a woman’s presiding over and administering the first birth means that her husband doesn’t participate. Dramatically highlighting this point is the fact that in the country where we now live, not only am I forbidden to participate in this way, I wouldn’t even be allowed into the room during this sacred event. I assure you – THIS IS AN INJUSTICE. So much so, that it has a direct impact on our discussions concerning whether to have children in the immediate future. And it’s not just me that feels robbed. My wife doesn’t appreciate the idea of birthing without me any better.

It’s analogous to someone interpreting the Proclamation on the Family to mean that I had no business being involved in the nurturing of my children. Thankfully, I’ve never heard anyone so misinterpret this prophetic counsel. (I have, on the other hand, quite often heard the reverse: that the Proclamation tells me why my wife has no business being involved in providing for our family’s temporal needs – but that’s another post altogether).

I think all of this helps to illuminate the way in which ideally, fathers and mothers ought to jointly midwife the second birth of their children, and to the possibility of ways in which men and women generally can be involved in carrying out this holy ordinance. I have no desire to preside over and administer our children’s baptisms in the absence of my wife. To me, it’s an injustice. I’m not proposing a specific agenda or outline of how the joint (if asymmetrical) participation ought to take place. But my entire soul believes that the union I underwent with my wife in marriage, while it didn’t abolish separate things that we each do or have primary responsibility over, did abolish our individual independence – and I feel the “fire pent up in my bones,” and a desire to shout hallelujah every time I reflect on and experience this fact. What’s more, I don’t believe that my wife’s participation in the ordinances I administer ought to be limited to symbolic or before/after sorts of participation – any more than my participation in conception and physical birth is merely symbolic or limited to a before/after participation. What has enriched and ennobled our experiences and our souls more than anything else has been the ways in which we’ve been able to unite in order to bear the fruits of divinity.