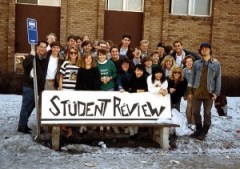 announcement this week that a group of BYU students is starting a new Student Review raised a lot of memories for me. Twenty-five years ago I was one of the group “tired of the universe” which was doing the same thing—starting an off-campus student newspaper for BYU students.

When I heard recently that this effort was underway, I didn’t remember initially that these events happened twenty-five years ago. Somehow it doesn’t seem that long. I remember that summer like it was yesterday. I remember the efforts that summer of 1986 to get the administration to allow our newspaper to be published and distributed on campus. I then remember how deceived and led on we felt when we were told at the end of the summer that operating on campus had never been an option. I know we then realized, just weeks later, that we were clearly better off not being on campus.

Student Review later was one of the driving forces behind the successful fight against BYU’s effort to require “resident assistants” in off-campus housing, just like it provided for on-campus housing. This move would have raised rents for students living off-campus, and brought a level of oversight that students generally found unacceptable. For those of us at Student Review, this success was empowering—we realized that we could represent the feelings of the student body in a way that previously hadn’t happened.

Of course, this doesn’t mean that students could get whatever they wanted. In many areas the administration wouldn’t change no matter what students wanted, and in other areas the majority LDS and overwhelmingly conservative student body was likely to agree with the administration, especially when issue somehow involved gospel principles. And then there were also issues that students simply didn’t care about.

That apathy on some subjects became apparent months later when the BYU administration mandated a change in student government. Student Review reflected the student body and showed little interest in the mandated change. But the result was a student government that was little more than an activities committee. In particular, a program I invested a lot of time in, the then 25-year-old student-run traffic court for on campus violations, was eliminated in favor of a hearing officer employed by the University Police (costing the University more and reducing independence from those who issued citations.

In the end, Student Review didn’t have any agenda except giving voice to BYU’s students, and as long as its efforts were limited to that, instead of some other agenda, it had the ability to stay successful. So most of Student Review’s content was simply what the students in its audience wanted to hear—a lot of humor, arts coverage and discussions of campus life.

I don’t know how much of a lesson or example this story might be for others or other situations. Student Review was media, and I don’t think that it was very different from anything else. If nothing else I hope this shows that communities and groups need some kind of media and need to feel that they are represented somewhere. I hope that the new Student Review can also find success in providing a voice for BYU’s students.