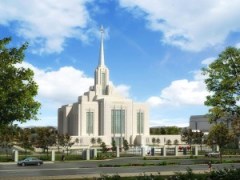 This weekend I got to drive past the Ogden Utah Temple, which is currently surrounded by a high fence as it undergoes a major renovation. While there is nothing new with renovating a Temple, as far as I can tell, this is the first time that the outside appearance of a Temple has had such a significant change. What does this mean?

My brother, who lives in Ogden, says that many members there couldn’t be more pleased. He says many couples looked at the Temples and passed, choosing to get married in Bountiful and Salt Lake instead. Of course, Ogden-based wedding photographers, caterers and others are also pleased at the prospect of more weddings in Ogden.

How temples look is also a central part of Mormon culture. Seeing temple photos and illustrations on the walls of members homes is almost cliché. The popularity of such images is so widespread that an entire industry exists to provide these images. So the appearance of these buildings clearly matters.

Of course, Mormons are hardly the only group that cares about the architecture of its buildings. Last Thursday I listened to Diane Rehm interview the master architect for the new World Trade Center, Daniel Libeskind, about his life and his design for the building site that has attracted more attention than any other for more than a decade. [See Libeskind’s design here]. I found his description (on the show) of his design to be fascinating and inspiring, especially his including symbolic elements in the design.

While I feel inadequate in any assessment of architecture (and I hesitate to compare temples to office towers, given their very different purposes), I do see a kind of parallel in the importance of symbolism and exterior appearance in these designs. Somewhat ironically, critics lambasted the original World Trade Center when it was first constructed, just as members have long lamented the appearance of the Ogden (and Provo) Temples. I have often wondered if local members had grown to love these Temples, despite the reactions to their appearance. In thinking about how members will react, I can’t help but remember that, in the aftermath of September 11th, the criticism of the original design of the World Trade Center have largely been forgotten and the images of the towers are largely beloved.

So, what does all this mean? If the exterior of a Temple is changed, what should we think? Is it just our own cultural understandings and influences that determine how we react? Does this change just reflect how our culture (both in and out of the Church) sees inspiration? or is there something more to appearance? And, was the original design a mistake? or just appropriate for its time?

Despite these issues, I assume that few Church members will mourn the old appearance of the Ogden Temple. Instead, rather quickly, they will adorn their walls with new illustrations of an Ogden Temple that looks very different from its predecessor. The old photos may eventually even be mistaken for photos of the Provo Temple—unless, of course, the Provo Temple is likewise renovated.

← “[The Church] Was Wrong”
An openly gay man in the [edit: NOT QUITE] bishopric →

33 comments for “The Look of Temples”