Ghedi, 13 years old, is trying to escape Mogadishu, the capital city of Somalia. Now, before I start Ghedi’s story, let’s get ourselves situated. Here’s Mogadishu relative to the rest of Africa: 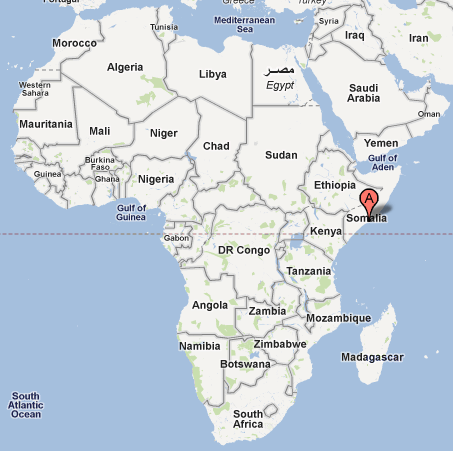 You can see that it’s a coastal city, on the southern end of the Horn of Africa (that’s the pokey piece of Africa jutting out right below the Saudi Arabia.) Let’s zoom in on that a little bit closer: 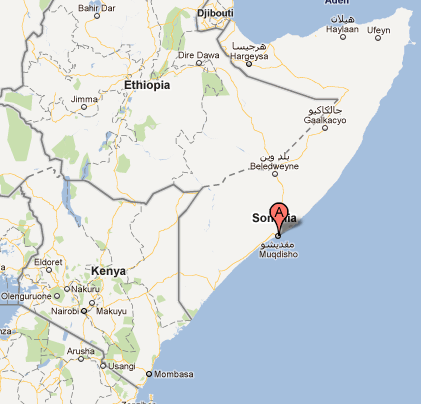 Note that Kenya is just southwest of Somalia. That’s important because Ghedi, the hero of our story, is trying to get out of Somalia and into Kenya. Specifically, he’s trying to reach Dadaab, a refugee camp in Kenya, 445 miles away. The journey looks like this: 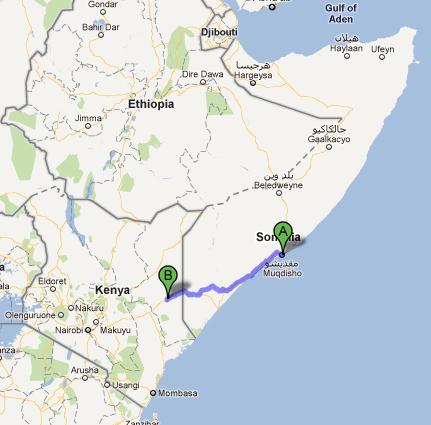 To put that in perspective, here’s the trip from Independence to Nauvoo, shown at the same scale: 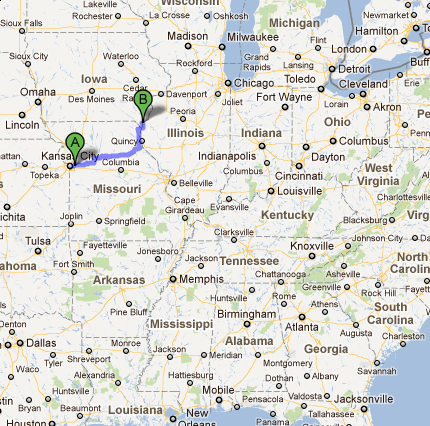 That’s 257 miles, according to Google — just over half the distance that Ghedi will need to travel in order to reach Dadaab in Kenya. Or, to compare with the trek from Winter Quarters to Salt Lake City: 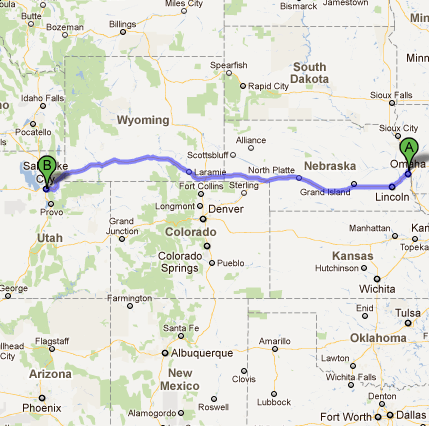 That trip is 938 miles — about twice as far as Ghedi needs to go.

But let’s get to the real issue: why is Ghedi (along with hundreds of thousands of others) trying to escape from his home in Somalia? Right now there are two very compelling reasons to leave.

First, Somalia is facing a drought. Not a “please be considerate and water your lawn only three times a week” kind of drought. This drought is consistently described by various news sources as the worst drought Somalia has faced in 60 years. And that’s saying something for a country that experiences drought every five or six years. So Ghedi is having a hard time finding anything to eat. And that certainly motivates a person to find new habitations.

Second: Al-Shabaab. Back in the summer of 2006, southern Somalia came under control the Islamic Courts Union (ICU). There was a lot of fighting, and by the end of 2006 the ICU had been defeated. At this point, the ICU fractured into smaller groups. One of these groups is Al-Shabbab, a fundamentalist group pushing to impose a strict Islamic law in Somalia.

Al-Shabaab has obtained significant power in southern Somalia since 2009. 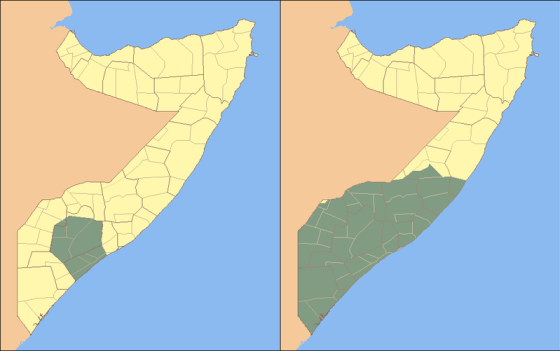 Map showing territorial gains made by al-Shabaab since January 31, 2009, when the civil war with Sharif Ahmed started.

Is that necessarily a bad thing? I mean, in a chaotic, lawless country, wouldn’t strict Sharia law be better than no law at all? Maybe. I’m no expert on Al-Shabaab or Somalia, so I turn to Wikipedia for a description of the group’s activities:

in the port of Kismayo, a young girl accused of adultery was buried up to her neck in the field of a soccer stadium packed with spectators, and then stoned to death; her family said that she was only thirteen years old and had in fact been gang-raped. This summer, in the ancient coastal town of Merca, the Shabaab decreed that gold and silver dental fillings were un-Islamic, and dispatched patrols to yank them out of people’s mouths.

The disturbing acts of violence … including beheadings and amputations and the pulling of gold fillings … are often committed by illiterate children rather than radical leaders. There has been little reporting in the West of the fact that a wide majority of al Shabab factions have actively cooperated with international humanitaritan relief efforts – if only for a fee.

I suppose the answer is, “It’s complicated.” But not really complicated. Because when thousands of people decide it would be better to trek out into the wilderness than to stay at home, that’s a pretty clear sign that things aren’t doing so hot.

So, I’ll leave you with that setting for now. We’ll come back to Ghedi next time and accompany him on his attempt to journey from the chaos of Mogadishu to the relative security of Dadaab.