Communication is not just about words, but the context, culture and worldview in which they are embedded.1 A simple translation of words will fail to communicate the entire message, because it doesn’t include this information. The complexities of communication are manifest in obvious and less obvious ways; sometimes we know what we’re missing, and sometimes we don’t. Here are some examples.

Teenagers can carry on entire conversations at the dinner table or on Facebook by quoting movies their parents haven’t seen. If it goes far enough, the parents realize that something beyond the actual spoken words is being communicated. They may not know what the actual message is, because they haven’t seen the movie; they’re unaware of the culturally-embedded context, which carries meaning beyond the words.
If it doesn’t go far enough that the parents catch on, then the kids have communicated a message in plain sight with the parents completely unaware.

Let’s say I’m a college chemistry professor with a poor sense of humor. Let’s say further that there’s an international student with excellent English, but has been very culturally sheltered. It’s Friday, there’s a big test on Monday. At the close of class on Friday, I intone “Study hard, because on Monday… A’ll be bock.” Said student understands the words that have been said, knows what they mean, but doesn’t understand why they were said with a funny accent or why the class laughed. Of course the professor will be back on Monday, why wouldn’t I be? [Edit: fixed to add] If the student has never seen any Terminator movies or Saturday Night Live skits mocking the Governator of Kallifownia, the extra nuance is lost.

Or, to make up a textual example, let’s say that zimbu (not an actual word) should be translated as “marriage,” but then that translation doesn’t tell you anything about the role of marriage in society, the rituals or feelings of marriage. In fact, without any of that other information, you’re left to fill in the gaps with whatever your own feelings and conception of marriage happen to be. You read the translation, but don’t get much of the information and you have no clue that what you’re reading in to it really shouldn’t be there. The dictionary won’t convey any of that information.

Marc Brettler gives some excellent examples of this in his How to Read the Bible (first pages available here), but one episode of Star Trek:TNG picks up this concept and pushes it to an extreme. In “Darmok” (Season 5 episode 2, now streaming on Netflix!), the crew encounter a civilization that they can’t communicate with, because they do not share any cultural knowledge. 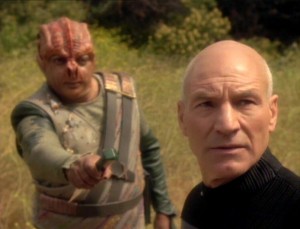 At first confused, Picard and crew eventually figure out that they communicate only through mytho-historical cultural references, such as “Darmok and Jalad at Tanagra.”

DATA: They seem to communicate through narrative imagery by reference to the individuals and places which appear in their mytho-historical accounts.

TROI: It’s as if I were to say to you, Juliet on her balcony.

CRUSHER: An image of romance.

TROI: Exactly. Imagery is everything to the Tamarians. It embodies their emotional states, their very thought processes. It’s how they communicate, and it’s how they think.

RIKER: If we know how they think, shouldn’t we be able to get something across to them?

DATA: No, sir. The situation is analogous to understanding the grammar of a language but none of the vocabulary.

CRUSHER: If I didn’t know who Juliet was or what she was doing on that balcony, the image alone wouldn’t have any meaning.

TROI: That’s correct. For instance, we know that Darmok was a great hero, a hunter, and that Tanagra was an island, but that’s it. Without the details, there’s no understanding.

DATA: It is necessary for us to learn the narrative from which the Tamarians are drawing their imagery. Given our current relations, that does not appear likely.

Through personal experience, Picard learns to speak their language; That is, he learns not just the words (words he already knows!) but the cultural meaning attached to them.

Put otherwise, translation is necessary but insufficient. Cultural context must be “translated” as well. We too must “learn the narrative from which [the Hebrews drew] their imagery.”

In part 2, I’ll apply this to the Old Testament with some examples.

BACK TO POST
Fn1 Body language represents another important part of communication, but isn’t present in texts.

← Thinking About Genesis
Mormons and Meaning on September 11 →

23 comments for “Beyond Translation: Darmok and Jalad at Tanagra, part 1”