In Part 1, I promised some Biblical examples of where translation alone fails to convey all the meaning an Israelite would have grasped. I’ve broken these examples into three fuzzy categories. 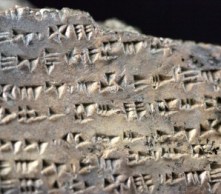 1) Israel is often described in the Torah as a “land flowing with milk and honey.” We probably all have milk and honey in our kitchen, yet not quite what is described here. In the Old Testament, milk doesn’t usually come from cows, and honey doesn’t come from bees. Cattle were primarily used for beef, while milk came primarily from goats, only rarely from cattle. Israelites didn’t raise bees, so honey was likely difficult to acquire. “Honey” was a boiled-down thick sweet syrup, usually made from dates or  some other fruit, though on rare occasion “honey” does seem to clearly indicate bee-honey. Israel, we might say then, was “a land oozing with chèvre and fruit-honey.”

2) Several times in Genesis 1, curious circumlocutions appear. There’s no mention of the sun or moon, but “greater light” and “lesser light.” Even though the account culminates in the seventh day, the Sabbath, there’s no mention of “sabbath.” And lastly, though we have the world bifurcated into water and dry land, the seas are mysteriously plural. All of these are explainable via polemical context. First, both the sun (shemesh) and moon (yareach) were also the names of those deities outside Israel, just as Ra designated both sun and sun-god in Egypt. We can see echoes of shemesh as the name of a (solar) deity in Israelite place names like bet-shemesh (Joshua 15:10), ir-shemesh (Joshua 19:41), and en-shemesh (Joshua 18:17), as well as in Sampson (shimshon). Genesis polemicizes against these deities; Not only are they creations, as opposed to co-creators as in some accounts, but their names are not even mentioned to avoid any hint of polytheism.

Similarly, the name for the sea (“yam”) was also the name of a prominent deity. Hebrew, as far as we can tell, did not have a full range of words for different-sized bodies as ocean, sea, lake, pond, puddle, etc. (think: Sea of Galillee), so it couldn’t simply substitute another term, but instead pluralizes to seas, yammim.

As for the sabbath, it seems that similar motivation may be the cause of its obvious absence in Genesis 1. However, upon further investigation, the support for this claim doesn’t rise to the same level as the others. I’ll bracket it until I can confirm or deny.

3) Here we come to shared background of cultural stories, the most Darmok-like category. One professor of mine described the texts from Ugarit as “the Old Testament of the Old Testament.” The New Testament assumes knowledge of Old Testament customs, laws, stories, etc. As it turns out, the Old Testament also assumes shared cultural knowledge, which modern readers lack. The discovery and decipherment of Ugaritic in 1928 began changing all that, and suddenly all kinds of allusions became clear.  Here is a summary of one example (and we’re really just dipping our toe in the ocean of this topic.)

Job, responding to God’s treatment of him, asks, “Am I yam or tannin, that you (God) should place a guard over me?” The KJV reads, “Am I the sea or a dragon…?” As noted above, yam was the name of a deity, namely, the sea deity at Ugarit, and represented several things, including chaos. Job 7:12 lacks the definite article, suggesting a proper name “Yam” instead of general reference to “the sea.” In the Baal epic, Yam is eventually defeated by Baal (the Ugaritic equivalent of Yahweh), and his power and influence are restrained, restricted, and guarded. These chaotic waters and their destructive power are sometimes represented by a great sea-monster, alternately known as dragon, serpent, Rahab, Leviathan, Behemoth, etc.

Generally speaking, the defeat of chaos/the waters results in order, creation, and the building of a temple for the deity. Allusions to this battle with chaos or Chaoskampf constitute Israel’s third creation tradition.  (We should acknowledge at this point, that this is reflected in Genesis as well, though with one important concept reversed. There are pre-existing waters, tannin are present, and God brings order out of chaos in creating the universe, and taking up residence and rest in his (cosmic) temple on the seventh day. However, in Genesis, there’s no battle, no conflict, no Chaoskampf, which is the emphasis elsewhere.)

Isaiah, Psalms, and other passages allude to an Israelite conception of a pre-creation battle with these figures, with God triumphant as king and the waters held at bay. The theme gets adapted as well to describe the destruction of Israel’s enemies (Egypt, etc.) as well as the apocalyptic end.  A small and random selection-

Psalm 74: 12-17 “Yet God my King is from of old, working salvation in the earth. You divided the sea by your might; you broke the heads of the dragons in the waters. You crushed the heads of Leviathan; you gave him as food for the creatures of the wilderness. You cut openings for springs and torrents; you dried up ever-flowing streams.  Yours is the day, yours also the night; you established the luminaries and the sun. You have fixed all the bounds of the earth;  you made summer and winter.” Note there the association between God’s conquering of the sea and creation.

Psalm 89:9-12 “You rule the raging of the sea; when its waves rise, you still them. You crushed Rahab like a carcass;  you scattered your enemies with your mighty arm. The heavens are yours, the earth also is yours; the world and all that is in it—you have founded them. The north and the south—you created them;” Again, God’s taming of the waters is associated with creation.

Revelation 12-13 with its imagery of the Dragon, the beast rising out of the sea, etc. as God’s primal enemy. My professor opined that Revelation actually has the clearest and most explicit Canaanite allusions out of all the Biblical passages.

Job and these other passages, then refer to a body of cultural knowledge shared between the Israelites and the Canaanites, but which we didn’t know about and therefore didn’t understand, until we discovered texts from Israel’s neighbors. These seem to be things Israelites had commonly known (and believed?), but translation alone failed because we lacked context.

Two notes and a caveat– At least one non-LDS scholar has suggested that the serpent in Genesis 2 is an echo of the chaos-enemy. Given the difficulty locating Satan within the Old Testament, that’s an interesting connection. Secondly, Dan Belnap has explored the Chaoskampf/Divine Warrior theme in the Book of Mormon, here. Lastly, I really feel like I’m giving this shallow treatment here, writing mostly from memory. I haven’t had a lot of time recently due to work, but this is an opportunity to hash out some ideas. Consider this a very very rough draft of, yes, the book I’m working on. I’ll also be going back to my last post to respond to comments.

← The Hitchhiker’s Guide to the Galaxy
Making Mormon Documents Available →

17 comments for “Beyond Translation: Job and Isaiah at Ugarit? Part 2”