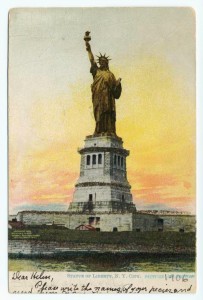 The New York Public Library posted on Facebook this morning that today is the 125th anniversary of  the dedication of the Statue of Liberty. While intended and generally thought of as an icon of freedom, its place in New York harbor, through which much immigration to the United States has passed, has meant that it is also considered a symbol of immigration.

That role was memorialized even before the statue’s dedication, in a sonnet written by Emma Lazarus, engraved on a bronze plaque that was mounted inside the monument itself in 1903. [The last 5 lines or so of the sonnet are familiar to most Americans.]:

Not like the brazen giant of Greek fame,
With conquering limbs astride from land to land;
Here at our sea-washed, sunset gates shall stand
A mighty woman with a torch, whose flame

Is the imprisoned lightning, and her name
Mother of Exiles. From her beacon-hand
Glows world-wide welcome; her mild eyes command
The air-bridged harbor that twin cities frame.

“Keep, ancient lands, your storied pomp!” cries she
With silent lips. “Give me your tired, your poor,
Your huddled masses yearning to breathe free,

The wretched refuse of your teeming shore.
Send these, the homeless, tempest-tost to me,
I lift my lamp beside the golden door!”

Just 18 years later Congress started restricting immigration, and in the ensuing decades, U.S. immigration law has become increasingly restrictive. Where once immigration restrictions were based on racial issues, favoring northern Europeans over others, now our restrictions are based on class, favoring the wealthy and well-educated over the “tired, poor, huddled masses” that Lazarus said the statue welcomed.

In short, our immigration law has gradually made a mockery of this symbol. We do not welcome, instead we have become yet another land with “storied pomp.” Our immigration laws seek not the poor, but the wealthy and educated. Worse, our actions towards many immigrants restrict freedom instead of promoting it.

Isn’t it time to change the law?

← Schedule (abridged)
Where do BYU students come from? →

51 comments for “Birthday of the New Colossus”