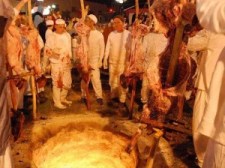 The worshippers gather together in the countryside, on the land of the leader’s extended family. He stands at an altar before them and shouts in a loud voice, reciting the strict and detailed requirements of the adherents which he claims (don’t they always claim this?) came from God, governing their eating habits, sexual habits, hygiene habits, even where they can live and whom they can marry. The worshippers chant their agreement in unison after each rule is read out, agreeing to all he tells them God says. After reiterating these “laws” hand-picked young men loyal to the leader slit the throats of cattle, and begin splashing the cow blood all over the adherents, binding them to the cult community and strict obedience, on pain of death by throat cutting.

…oh wait, false alarm, pitchforks down, everyone. It’s the Law of Moses and Exodus 24 (slightly conflated with some Deuteronomy and rearranged for polemic effect).

What exactly is going on here? Covenant rituals often involved animal sacrifice, as a way of ratifying the covenant and symbolizing, often rather graphically, the downside to violating the covenant. Indeed, one “cuts” a covenant in Hebrew. In other words, while we hear often about the blessings of covenants, they carry the potential of both blessings and cursings of one kind or another. A few examples from Israel and her neighbors-

In Genesis 15, Abraham asks God for some kind of assurance God’s promises will happen; He wants God to ratify His promises. Following instructions, Abraham slaughters several kinds of animals, and God later passes in between the cut-up parts. This, apparently was a ritual in which the party passing through the animal pieces was identified with the dead animals, swearing to keep the covenant or else become like them, throats cut, bodies torn.

Much later on in Israel’s history, prominent Israelites had covenanted to release their “servants” for the Jubilee year, but then took them back as slaves again. God responds through Jeremiah by invoking the covenantal curse, ” those who transgressed my covenant and did not keep the terms of the covenant that they made before me, I will make like the calf when they cut it in two and passed between its parts: the officials of Judah, the officials of Jerusalem, the eunuchs, the priests, and all the people of the land who passed between the parts of the calf shall be handed over to their enemies and to those who seek their lives. Their corpses shall become food for the birds of the air and the wild animals of the earth.” (Jeremiah 34:18-20) Israelites also used gestures of throatcutting to swear oaths. “May the Lord do thus and more to me if I fail to [do X Y or Z].” This sentence uses “thus” (Heb. coh) “like this,” “like so” and probably was accompanied by some kind of gesture of self-harm.(See my podcast on Ruth.)

The Aramaic treaty  between two kings, Bargayah and Matti’el, found at Sefire, uses more objects than animals in the ritual. These similes graphically depict the consequences of violating the covenant. Again, note the calf cut in two, as in Genesis 15.

“Just as this wax is burned by fire, so may Mati[‘el be burned by fi]re! Just as (this) bow and these arrows are broken, so may Inurta and Hadad break [the bow of Mati’el], and the bow of his nobles! And just as the man of wax is blinded, so may Mati[‘el] be blinded! [Just as] this calf is cut in two, so may Mati’el be cut in two, and may his nobles be cut in two! [And just as] a [har]lot is stripped naked], so may the wives of Mati’el be stripped naked, and the wives of his offspring, and the wives of [his] no[bles! And just as this wax woman is taken] and one strikes her on the face, so may the [wives of Mati’el] be taken”– Context of Scripture, 2.82

The curses there go on and on. (In the vassal treaty of Esarhaddon, the blessings are short, but the cursings go for 400 lines, as I recall.)

I make two points with this.

First, as I hope I’ve shown, craziness is somewhat relative, and you can make just about anything look crazy in how you frame it. Richard Bushman makes this point responding a recent CNN blogpost by an ex-Mormon of the Godmakers/Ed Decker vein, after the author describes the LDS temple as “completely violent, mind controlling and alarming.”

Erickson does a good job of making Mormon temple rituals seem ominous and irrational. The secrecy surrounding the temple inevitably arouses suspicion, but in my opinion secrecy is important. I see Mormon temples as an effort to create a sacred space in a secular world, a quest followed by numerous religious peoples throughout history. They are a spatial equivalent of the Christian and Jewish Sabbath where a sacred time is demarked from the rest of the week.

One way to set temples apart as a sacred space is to make them secret. They are not, of course, actually secret, Erickson and Dekker [sic] quote passages from the ceremony and the whole script can be found online. But Mormons treat them as secret by not even discussing the ceremonies among themselves outside the temple walls. The various measures taken to protect these spaces means Mormons find they can draw closer to God when they enter the temples.

To my way of thinking the idiosyncrasies of Mormon belief and practice are not the issue; Catholic belief in transubstantiation and Protestant belief in the Resurrection can be made to look silly, too.

Second, some of Mormonism’s more lurid and, shall we say, “creative” critics like Ed Decker have claimed that nothing so (apparently) violent or strange as the LDS temple ever had a place within Christianity or Judaism; it’s not “Biblical”. I think I’ve shown that such a claim represents either ignorance or a double-standard; No one’s ever been splattered with warm animal blood in the temple. My wife quipped in response, “It’s so shocking, you have trouble staying awake.”

[Note: the topic here is not sacred vs. secret nor the temple per se, but how one frames such issues, and double-standards. Limit your comments to that. And, as usual, cranked out rather quickly.]

11 comments for “Definitely a cult. Maybe.”