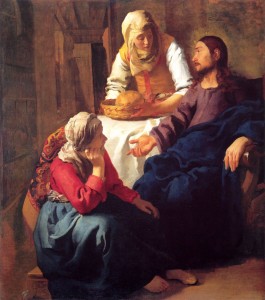 Having spent the past eight months in Tunisia, where our tiny L.D.S. group had very little formal structure, I had almost forgotten what it was like to go to a Church meeting without husband and children in tow. Attending the General Relief Society Meeting with a few friends was like a welcome home.

I had found the new Daughters in My Kingdom book at my parents’ house when I arrived a few days before the General Relief Society Meeting, and somehow gotten the idea that it had come out months ago and was more or less required reading before the Meeting. Consequently, the three Relief Society Presidency’s talks, which all quoted extensively from the book, sounded awfully familiar from all my cramming.

I found the book interesting, though, and didn’t mind hearing it rehashed. While I know that Relief Society is “the largest women’s organization in the world,” I’ve certainly been guilty of completely forgetting my membership in it during the week, and feeling sometimes like it’s just a nice, well-decorated, girls-only meeting on Sundays.

So I particularly enjoyed President Beck’s talk, “What I Hope My Granddaughters (and Grandsons) Will Understand about Relief Society.”

My first strong impression from Sister Beck’s talk was her quote that “women were vital participants in the Savior’s ministry.” Yes, the New Testament is full of female cameos, but I had never read it with the purpose of putting together a coherent idea of women’s participation in the Ancient Church.

Chapter 1 of Daughters in My Kingdom paints a picture I’ve not seen before in a Church publication, of women playing key service, economic, and ecclesiastical roles in the Church as organized by Christ. Beck goes on to assert that this pattern of active participation by women was one of the elements of the Ancient Church that was lost during the Apostasy. I will definitely be incorporating elements of this chapter and Sister Beck’s talk into future Family Home Evenings about the Ancient Church and the Apostasy in our home.

To reinforce the idea that women’s participation in the Church was fundamental, Beck points out that it was only a few months after the Church was organized that “the Lord revealed that Emma Smith was to be set apart as a leader and teacher in the Church and as an official helper to her husband, the Prophet.”

I thought it was fascinating that she later referenced Joseph Smith’s statement about a lecture on Priesthood given to the Relief Society after its organization, in which he explained “how [they] would come in possession of the privileges, blessings and gifts of the Priesthood.” While Sister Beck did not bring it up in her talk, part of that lecture on Priesthood she referenced included Joseph’s statements approving the laying on of hands by women to heal the sick, and enjoining those who forbade the women from laying on their hands to “hold their tongues.”

Sister Beck took up a later line in Joseph’s lecture, linking those privileges, blessings and gifts of the Priesthood to the Temple. She briefly references Chapter 2 of Daughters in My Kingdom, which explains the proto-Relief Society as a spontaneous movement that grew out of the desire of several prominent women in Nauvoo to assist in the building of the Temple.

The focus on a sisterhood of women helping each other to become more holy and prepare for the blessings of the temple was a beautiful and meaningful way for me to understand Relief Society. This temple preparation purpose of Relief Society becomes even more profound when I consider that it continues seamlessly within the temple walls, as women officiate for each other and administer sacred ordinances, both for themselves, and for the women of ages past.

Later chapters of Daughters in My Kingdom describe a Relief Society during the first half of the 20th century that often functioned as a fairly independent organization, and involved itself in community causes and projects, working in tandem with other local and national women’s organizations.

My admiration for the Relief Society grew as I read how during World War I the U.S. government bought 200,000 bushels of much-needed wheat, which had been stored for years by the provident Relief Society. The midwife who delivered my son a few years ago had studied her craft in Utah, and spoke glowingly of the “tradition of Mormon midwives.” I was never quite sure what she meant. So I was interested to find out more about how Sister Zina D. H. Young, herself a midwife, encouraged some members of the Relief Society to study in the eastern United States and then come back to establish a midwifery and nursing program in Utah.

In her talk, Sister Beck provides continuity between the old school Utah-based Relief Society and the current organization by describing these and other dramatic projects undertaken by the Relief Society in earlier days as establishing “patterns of discipleship” and laying the foundation for the much more streamlined structure and work of Relief Society now in the worldwide Church.

Although I grew up in the Church, it was my first time having a Relief Society calling, and I was both dismayed and embarrassed when the other sisters looked to me to answer basic questions about the structure and functioning of Relief Society, just because I was from the United States.

I was even more dismayed to find that my vague memories of how things seemed to work in my U.S. wards often actually did turn out to be the best guide we had for implementing Relief Society programs in our struggling branch. I can see the wisdom in jettisoning many of the worthy but complex tasks undertaken by Relief Society in previous generations, in favor of a simpler program that actually has a chance of being implemented more or less similarly everywhere.

(But I’ll never forget the great amusement and delight of a sister in the branch when I brought her cookies one day. She said she had read many times in the Church magazines about people taking each other cookies, but it was such an odd thing to do in Italy that it had never before happened to her. Just doing my part to export Mormon culture to the far reaches of the worldwide Church.)

The final segment of Sister Beck’s talk related to visiting teaching, which seems to come up in the Relief Society meeting as often as my husband says pornography comes up in the Priesthood session. I really loved her comparison of the statistics-based model of visiting teaching with the law of Moses; not a waste, but a preparation to help sisters “learn patterns of watchcare.” Going back to her original theme of women in the church at the time of Christ, she said (about visiting teaching) that “[t]his element of our discipleship should closely resemble the ministry of our Savior.”

The sense I got was of a raising of the bar, and a plea to take full responsibility for watching over the women who have been assigned to our care, and their families. Her threefold injunction to “sincerely come to know and love each sister, help her strengthen her faith, and give service,” inspired me to recommit myself to really taking my visiting teaching as an assignment straight from Christ to care for the “one” as he would do it.

All in all, I felt that my affection for and identification with Relief Society was strengthened by Sister Beck’s talk, and by the new Daughters in My Kingdom book. The many interesting historical vignettes, interwoven with words of prophets and past Relief Society presidents, and tied together by modern commentary, make Daughters in My Kingdom a valuable little book. Looking back on my clueless experience in the Relief Society presidency of our little Italian branch, I wish I’d had it then. I imagine that this book will provide a useful and inspiring point of reference for Relief Societies all over the worldwide church.

7 comments for “Sister Beck and Daughters in My Kingdom”