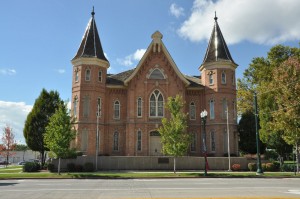 With the announcement today that the Provo Tabernacle will be reconstructed and made into a Temple, I wondered what its official name will be? Or in other words, how will its name be different from the other Provo Utah Temple?

There are other potential questions following this announcement — like where the concerts and other events that the Tabernacle once hosted will go and, perhaps more importantly, how unfortunate it will be to have a Temple so near to NuSkin’s ugly monstrous eye sore across the block from the Tabernacle.

As far as I can tell, this is the first time that two LDS Temples will be so close together (less than 3 miles apart). Normally, a Temple is named for the city or town it is located in. But since Provo, Utah already has the Provo Utah Temple, the Tabernacle either won’t have this name or the current Temple will have to be re-named.

For those who don’t know, the LDS Church has official naming conventions for everything from Missions and Temples to Wards and Branches. I assume that the Temple name will have to follow the convention for other entities, and will follow the pattern:

or, outside of the U.S. and Canada:

The optional neighborhood or compass direction could also be a nearby landmark or feature that is compatible with the Church and reflects well — which is one of the reasons that, as much as some of us think it would be cool, we aren’t likely to see the Hell’s Kitchen Ward here in New York City.

So, if the current Provo Utah Temple retains its name, then the new Temple might be named something like:

Provo Utah NuSkin Temple (well, no, not really a possibility).

Anyway, what do you think the name of the new temple should be? And, while we’re at it, let’s have some fun and see what the oddest suggested name is (excluding names that are offensive). Lets see some creativity, folks!

← The Church and Taxes
Elder Perry and the Church’s Image →

78 comments for “So what should the Provo Tabernacle/Temple be called?”