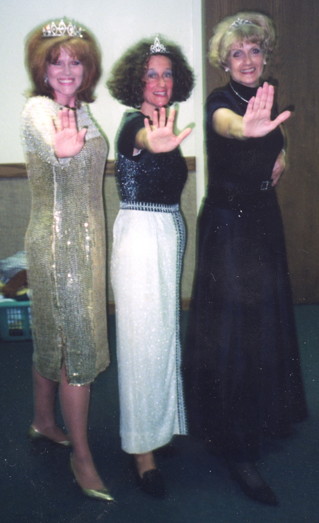 Often in the quest for equality in the church programs for girls and boys, women talk about how much they would have loved to do all the scout activities. As I said in the Boy Scout Redux, I was very envious of many parts of scouting. I love rafting, I pitched in the first girls’ little league in Orem, I ran a marathon to “celebrate” my 40th birthday, and I played intramural flag football and co-ed softball at BYU up until I was past my due date with my second pregnancy. But I don’t love everything “boyish.” I was a ballroom dancer and put myself through college, in part, with pageant winnings. So I’ve got a serious girlie side, too.

So what do girls want? They don’t necessarily want a Boy Scout clone with their gender inserted. But they do want something that’s in the ballpark with regard to resources and recognition. When my brother was at the Jamboree, my big summer church activity was to crochet a hot pad. Seriously.

Personally, I don’t care if the girls want to rough it in the mountains, or have an enormous beauty shop makeover, I just think they should have resources and support to do some things they enjoy — whatever they are — and to be recognized for their accomplishemnts.

It seems that part of the problem is an underlying feeling that “girlie” things are frivolous, while “boyish” things are crucial survival skills. Granted, the church has allowed more than it’s share of (stupid) craft projects (those that Johnny Biscuit affectionately refers to as “sticks and weeds”). And far too many of us were subjected to coffee table grapes. (My mother refused to make them. We were so uncool.) Those superficial activities seem to have morphed over a period of years from the more practical homemaking and self-reliance skills that really did provide value. But in my experience most of those activities were (and are) self-funded.

Still, I’m hopeful that someday we can stop acting like learning to lash a latrine or getting a bowling belt loop is enormously elevated in substance to scrapbooking or having pedicure night.

And while we’re at it, can we stop implying that “campouts” — with boys urinating out the sides of tents and tying firecrackers to rodents — turn boys in to men, but girls at “sleep overs” are vulnerable to molestation?

One year in Boca Raton, all the Young Men in our ward certified in SCUBA. (Cost about $200 per kid, I think?) As one of the Young Women leaders at the time, I asked if the girls were included. No. I asked if they could do a comparable activity. After some hemming and hawing I got a, “Well…OK…bring us your ideas for approval.”

In the time before I moved, we presented four or five ideas. All the ideas were things the girls came up with, none costing nearly as much as SCUBA certification, all things we could administer ourselves. (One was, for example, a nail/hair/sleepover thing.) None of the ideas were approved while I lived there as.

So, in theory they were open to the idea of the girls doing some big thing, but none of the things the girls brought up were deemed valuable enough to actually allow. I mean, who cares if you can do your hair? But if there’s a tsunami, then SCUBA is a valuable life saving skill. And the pottery merit badge means we can eat food in dishes, after all humanity has been extinguished. And the stamp collecting merit badge means we will have something really cool to look at while we’re in the fallout shelters after the “big one.” Or something.

Just because male leaders don’t personally like girl stuff doesn’t mean the girl stuff isn’t as valuable as the boy stuff. One of the problems women face in a church with all-male approval is trying to get the leaders to see things from a perspective that is usually pretty foreign to them. And to value the other perspective, even if they don’t quite understand it.

If gender matters, how do we help male leaders value the female perspective?

[The image is of me and my friends, Sue Petersen and Rolain Lake, warming up for our ward talent show rendition of Stop! In the Name of Love. Obviously, we were girlie and fabulicious. And big hair rocks.]

← Meditation
Quotes of Note- McKay on Running the Church →

31 comments for “Church and the Value of Girlie Things”