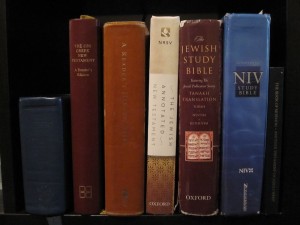 My family is not very large (C and, uh, me. Not even a cat), so schedules aren’t hard to coordinate. We’re both active in the Church, and bibliophiles who regularly read and study our own scriptures,  and yet we’ve never been able to have productive scripture study together. I am largely to blame for that, since our questions and interests tend to not overlap very much and mine are too arcane and rabbit-hole-ish to be productive for her. In spite of trying several times, it’s never lasted long.

I have memories of my teens, bleary-eyed hot breakfast at 5:15, slogging through Alma, taking turns reading in between bites of Hutterite pancake with cream and bananas. We read every day, but I never felt conscious enough to really pay attention, especially since I was competing with three brothers for pancakes. (My older sister wasn’t very competitive in the pancake horking department.) Somehow between hearing it at breakfast and sleeping through four years of Seminary (6:00-6:45), I learned enough through osmosis that my MTC group designated me the “scriptorian” of the group, thoroughly dismaying me as to how little one needed to know to be thus branded. Regardless, I was convinced at that point that group scripture study had value. If I with so little grey matter devoted to paying attention, could learn simply by being there, what could you accomplish if you actively engaged with the text and co-reader?

This week, with the arrival of my Jewish Annotated New Testament edition of the NRSV, C and I have begun anew.  Hope springs eternal, right? Someone reads out of the KJV while the other follows along in the NRSV; after a few verses, we switch, and talk about what stands out from the differences, whether textual (phrases missing or added) or translational, and any questions that arise. If we had kids, I think we might try giving everyone a different translation. The advantage to following along in a different translation is that when you’re not reading out loud, you’re still engaged and paying attention to the text, mentally comparing it to what you hear. So far, we both like it and we’ve had some good conversation.

If you’re not ready to take the plunge away from the KJV, the NKJV (New King James Version) is an acceptable gateway Bible. It updates some of the KJV language, but not the textual basis. (Link to comparison, can’t speak for the rest of the site).

What tips and tricks do you have for group or family scripture study? What works for you, in your family situation? Teens, mixed ages, empty nest retirees, young childless, other?

24 comments for “Finally, Family Scripture Study that Works for Us”