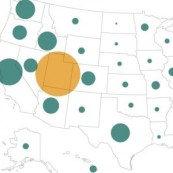 The Chronicle of Higher Education has given us a new statistical toy to play with. Based on the Department of Education’s enrollment surveys, the Chronicle has created a widget that shows which U.S. states (but not foreign countries) the incoming freshman class of American colleges and universities come from.

For the BYU campuses, the results are about what you would expect from a private university with a national constituency but located in a large western state with a modest population. The largest contingents come from Utah, California, and other western states, with significant representation from the eastern U.S. as well. If you take a minute to compare BYU to other universities, you will find that the BYU student body has a geographic diversity in line with what you would find at other private national universities, which is significantly higher than most state universities. (There are undoubtedly similar statistics for racial, economic, and international geographic diversity, which this particular widget does not reflect. For what it is worth, the students who self-select for my classes at BYU-Idaho are about as diverse as the students I have previously taught at state universities, except for the fact that, you know, they’re all Mormons.)

There are a few surprises. While the larger states of the Midwest, Northeast, and South contribute BYU students in significant numbers, there is a band of states in the middle of the country, from North Dakota through Kansas to Louisiana, which relatively few BYU students call home. BYU-Idaho has become less Idahoan, with the Idaho contingent dropping from 30% to 20% of the freshman class over the last 15 years. BYU, on the other hand, has become more Utahan, from a recent low of 23% of freshmen in 1998 increasing to 32% in 2010, while the Californian contingent has declined. It will be interesting to see if the recent financial difficulties and tuition increases in the California public university systems will result in more Californians attending BYU.

← Birthday of the New Colossus
Clean-Shaven →

35 comments for “Where do BYU students come from?”