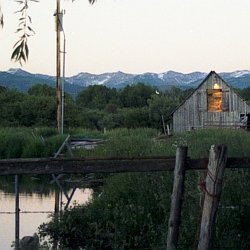 Yesterday I dedicated the grave of my grandfather, Verl Bagley, who by one measure spent his life at the end of the earth. A hierarchy of geographic and cultural distance from coastal metropolises like New York City or Los Angeles might descend through Chicago to Denver to Salt Lake City to Idaho Falls. From Idaho Falls, you drive a half hour to Rexburg, then an hour through the dry farms into Driggs, the largest town in Teton Valley, and then another ten miles to Victor. In Victor, you turn right on the Cedron road and drive almost to the end, and there my grandfather lived. Aside from a mission late in life to Oklahoma, and occasional visits to see his children and grandchildren, my grandfather never traveled far from home.

Not many people would choose that kind of life today. Or, rather, it’s a life that we can scarcely imagine, let alone choose.  His mother, as a young girl, watched the U.S. Army escorting the Shoshone onto a reservation. When my grandfather was born, Russia and Austria were ruled by Romanovs and Habsburgs. He began herding sheep, summer and fall, at the age of twelve. Some people leave home for college; he went away to Ricks and stayed only a quarter, just enough time to discover that he was a better sheep herder than college student, and time enough to meet my grandmother. Other men of his generation went away to war, but he was excused from service because sheep herding was a strategically important industry. As stake Sunday School superintendant, he visited the Kelly branch just north of Jackson; its remaining structures are known today as Mormon Row, an iconic monument to a moment in the settlement of the West that is not quite so far past as one might think at first glance. As the Teton Valley water master, my grandfather oversaw the local irrigation system for many years, while also serving unofficially as the dowser for anyone who wanted their well to hit water at a reasonable depth. For all his interest in news of the wider world – at the time of his death, he had been a regular subscriber to the Post-Register for seventy-eight years running – nearly all his life was bounded by the hills and mountains that he could see from his front porch, and he was subject to all the stresses and hardship entailed by life on a family-owned ranch.

As I said, it’s not how many of us would choose to live. But there are worse ways to finish your life, I think, than in a house you built and lived in for seventy years that drew water from a well you dug on the spot you witched with a willow rod, surrounded by gardens bearing the flowers and vegetables you planted and land that your sons and grandsons still work and hills whose every slope you’ve ridden and streams whose whole length you’ve fished with your children and grandchildren and great-grandchildren. There are no good deaths, but there may be none better.