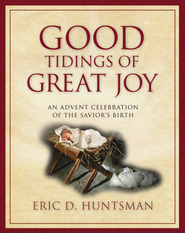 During World War I, in Ypres and in a few other places, British and German soldiers engaged in a spontaneous “Christmas truce” complete with caroling and even the exchange of small presents. Cast as enemies and surrounded by the weapons of war, they chose to celebrate together the birth of Jesus Christ.

I thought about that truce as I read BYU Religious Education professor Eric D. Huntsman’s Good Tidings of Great Joy. There are landmines a plenty in any serious consideration of Christmas, but Huntsman manages to avoid them and focus on celebrating the Christ child. I think he did get at least one flesh wound–more on that in a minute–but he’s done an amazing job of standing up in heavy fire, not the least of which comes from trying to combine devotional, academic, artistic, and personal writings. But somehow, he manages to pull it off.

The book consists of chapters on Matthew 1, Luke 1, Luke 2, Matthew 2, and the Book of Mormon materials concerning Jesus’ birth. The appendices include a more technical analysis of Luke and Matthew, materials for daily devotionals in December, and a personal narrative about addressing special needs at Christmas.

So on to the first landmine: as I said in my review of the companion book God So Loved the World,

He deals delicately but directly with situations where LDS authorities have staked out positions on various interpretive issues as a result of, we might suppose, their exposure to 19th century biblical scholarship instead of direct revelation. He does this with such finesse that most readers probably won’t even realize what is happening, but those of us familiar with the interpretive history will thank him for blazing a clear and gracious path.

He does the same in this book with the date and year of Jesus’ birth, Matthew’s (and our) interpretation of Isaiah 7:14, and the nature of Jesus’ conception. The debates behind these issues may be new to the average reader and Huntsman provides a gentle but rigorous introduction. The material won’t be new to biblical studies geeks, but they will still learn from his deft handling of the controversies.

Next landmine: no one likes to admit it, but the holiday season just stinks for a lot of people. His sidebar on sadness at Christmastime, as well as a longer section on the challenges (and blessings) of having a child with autism at Christmas, are marvelous guides for those who face any manner of trial and are sick of people telling them to be merry and bright.

Another landmine: sometimes when we do “real” biblical scholarship, we lose the devotional use of the text in a flurry of Greek verb forms and bloodless historical data. Huntsman excels at presenting background material that actually enhances the reader’s appreciation of the text. For example, I love his handling of the genealogy of Jesus in Matthew. That’s material most readers skim since a long list of “begats” isn’t exactly inviting. And many scholars who do cover the genealogy go all Grinch on us and are content to merely point out that Matthew’s genealogy can’t possibly be accurate and, even if it were, it can’t be reconciled with Luke’s genealogy. But Huntsman points out that literal accuracy probably wasn’t ever the point. He explores the structure of the genealogy and what it can teach us about who Jesus was. He also handles the differences between Matthew and Luke’s genealogies very well, offering a few suggestions for reconciliation but ultimately leaving the question open. And he doesn’t neglect the women in the genealogy, either; I can’t tell you how happy it makes me (especially given my kvetching here) when an LDS biblical scholar writes something like this:

“Luke presents his characters in the Infancy Narrative in gender pairs, with a female character matching each central male figure. . . . Simeon and Anna are prophetic figures reflecting Old Testament figures such as Isaiah and Huldah.” (p49)

He also does an excellent job of teasing out the contrasts between characters in Luke’s story and of pointing out allusions to Old Testament texts. If you pick up this book and think “this is another one of those content-free coffee table books,” you are sorely mistaken. There are all sorts of great insights into the texts here.

One more landmine: many families struggle with the secular/commercial/materialistic/traditional aspects of Christmas juxtaposed with the holiness of the event. I think the author does a fabulous job suggesting ways to celebrate the spiritual aspects of the season. These include music, daily devotional ideas, and the artwork within the book itself. I particularly appreciated the art that departs from the Mormon norm, such as Giotto di Bondone’s The Nativity. There’s plenty here to help an individual or family craft meaningful Christmas traditions.

Which brings us to our next landmine: you know that something is askew in Mormonism when the Ensign can print a personal essay implying that the Christmas celebrations of non-members lack “genuine compassion and service” (link here, scroll down to “Who Will Be the Present?”) while a member of the First Presidency can describe his family’s celebration of Advent in glowing terms. This raises a huge issue: When do we need to abandon family Christmas traditions because they aren’t part of LDS culture? Can we adopt the traditions of other cultures/faiths if we find them useful? This isn’t a “how many angels can dance on a pinhead” question, either, if you are a new convert and Nana asks where your Advent wreath is or Uncle Joe implies that anyone who stays at his house should attend Midnight Mass with the family. Mix in recently-wed couples trying to determine which holiday traditions to establish in their new little families and more established families trying to counter the mad materialism of the season and you have yet one more source of holiday stress. Huntsman gives the reader theological permission to celebrate Advent, along with practical guidance as to how to do so. That said, I couldn’t help wondering, as I read his history of Christmas from pagan ritual to Christian centerpiece, why it is kosher for us to adopt these practices/beliefs/traditions from the time of the “apostasy.” In this light, I can understand the confusion of a new member who thinks that non-LDS Christmas traditions are lacking, even though reading that statement in the Ensign made me wince. Huntsman doesn’t really grapple with the larger issue of why we can adopt Christmas traditions/practices from “apostate” Christianity when we spend most of our time scorning every other development from that milieu.

Now for another flesh wound. I make the same critique here that I did of his Easter book: while I’m thrilled that he seriously engages scholarship on these issues, he also unwittingly drops a few bombs on the reader who is new to this sort of thing. For example, what are we to conclude from the fact that the first gospel didn’t think any story before Jesus’ baptism was worth including? And what do we do with what he calls the “seeming contradictions” (p11) between Matthew’s and Luke’s accounts? Huntsman admits that these sometimes leave him feeling “deflated” (p13). He finds solace in the Book of Mormon materials that address Jesus’ birth; will that be an adequate solution for all readers?

But these are minor issues and most readers won’t, I think, be bothered by such things. They’ll be too busy being dazzled by the masterful mixing of music, art, real biblical scholarship, personal narrative, and practical guidance.

Note: The publisher provided me with a review copy of this book.