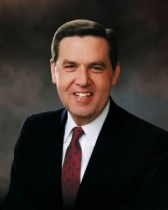 Unfortunately inspired by a personal experience related to me recently, I present a rebuke of sorts  and a call for more Christ-like compassion by Elder Holland.

“When a battered, weary swimmer tries valiantly to get back to shore, after having fought strong winds and rough waves which he should never have challenged in the first place, those of us who might have had better judgment, or perhaps just better luck, ought not to row out to his side, beat him with our oars, and shove his head back underwater. That’s not what boats were made for. But some of us do that to each other.” –A Robe, a Ring, and a Fatted Calf, BYU Devotional, 1984. (Also available in mp3 and other formats)

Holland’s negative inspiration for the boat-model was someone he grew up with, who suffered at the hands of those who might have helped and encouraged him instead.

“one of the added tragedies in transgression is that even if we make the effort to change, to try again, to come back, others often insist upon leaving the old labels with us.

I grew up in the same town with a boy who had no father and precious few of the other blessings of life. The young men in our community found it easy to tease and taunt and bully him. And in the process of it all he made some mistakes, though I cannot believe his mistakes were more serious than those of his Latter-day Saint friends who made life so miserable for him. He began to drink and smoke, and the gospel principles which had never meant much to him now meant even less. He had been cast in a role by LDS friends who should have known better and he began to play the part perfectly. Soon he drank even more, went to school even less, and went to Church not at all. Then one day he was gone. Some said that they thought he had joined the army.

That was about 1959 or so. Fifteen or sixteen years later he came home. At least he tried to come home. He had found the significance of the gospel in his life. He had married a wonderful girl, and they had a beautiful family. But he discovered something upon his return. He had changed, but some of his old friends hadn’t–and they were unwilling to let him escape his past.

This was hard for him and hard for his family. They bought a little home and started a small business, but they struggled both personally and professionally and finally moved away. For reasons that don’t need to be detailed here, the story goes on to a very unhappy ending. He died a year ago at age 44. That’s too young to die these days, and it’s certainly too young to die away from home.”

I don’t have a lot to add to this, except to a few scriptural phrases it evokes for me.

” And now, O God, what shall we say after all this?” (Ezra’s prayer in Ezra 9, my translation here)

It’s an excellent sermon. A Robe, a Ring, and a Fatted Calf