FOX News was on while I stood in line at McDonald’s last night. I noticed that the guy being interviewed looked distinctly Mormon (apparently we have a distinctive look), so I walked over to see what was up. The guest was Connor Boyack, and he was talking about how, of all the political ideologies, Mormonism is most compatible with Libertarianism.

The Mormon-Libertarian connection is nothing new, but it fits in with something that’s been on my mind lately — competing “goods”. Or, in Elder Oaks’ words, “good, better, and best”.

As I see it, there are three cardinal points of political virtue that we wrangle over in the church: 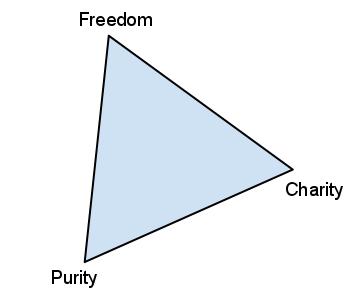 (I think the role of authoritative church statements in this triangle is fascinating. Boyack reaches out to Pres. Benson for support, and others have done the same in support of Libertarianism with words from church leaders extending back to Brigham Young. But not Joseph Smith, I don’t think. Joseph’s statements are, perhaps, generally too pro-government to be used as ammunition there.)

Now there might be better names for these than the ones I’ve chosen, but I think “freedom”, “purity”, and “charity” convey the point effectively. By purity, I mean those values that come down to an intrinsic sense of “rightness” — things that are not arguable, but that are right (or wrong) because God declares them to be that way. Gay marriage is as good a political issue as any to exemplify what I mean by purity. Arguments of gay marriage pit the “purity” camp against the “freedom” and “charity” camps.

When there is moral strife over the appropriate policies of government, I believe it essentially comes down to a question of ordering these three principles into “good”, “better”, and “best”. By and large, we recognize that all three of these are valid principles. The question is, when they conflict, which do we privilege?

I don’t mean that these three are the only considerations in developing governmental policy; only that they are the three moral considerations. A non-moral consideration (and perhaps the single most weighty opposing force to the triangle) is economics. For example, immigration isn’t an issue between the corners of the morality triangle (at least not most of the time — there are some racist arguments that make an appeal to “purity”, but I’ll ignore those here). It’s an issue between the “charity” corner and the economic question of what services we can afford.

In fact, economic concerns are so weighty that I’d place them as a forth point, the pinacle of a pyramid, competing with the three moral values in the triangle: 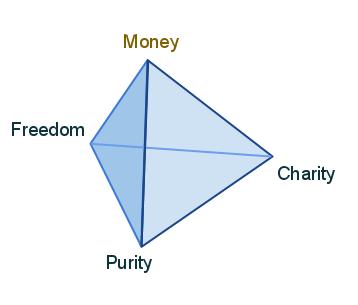 My own weightings of these three values have shifted over the years. One of the biggest changes for me was due to the time I spent serving as Elders Quorum President in a rural Oregon ward. Up to that point, I’d spent essentially all my life in relatively affluent areas. I grew up in suburban California, went to school at BYU, and served a mission in Japan. This ward in Oregon was my first experience really seeing the effects of unemployment, poverty, and lack of opportunity.

When these families and individuals, some active in church and some not-so-active, came into hard times, the ward members reached out and made up the difference. I’d never seen charitable service to such an extent. Perhaps that same level of service occurred in my other wards and I just never saw it because I hadn’t been in a position of authority, but I don’t think that’s the case. I think that the particular economic situation of this ward created an atmosphere of service — one of both independence and interdependence. Regardless, those experiences shifted purity down and charity up in my moral weighting scale. I saw that the most serviceable weren’t necessarily the most “righteous”, and realized that the service counted for a lot more than the righteousness, at least to my heart.

Ultimately, though, what I find interesting in this is the idea that virtues compete with virtues. (That would be a fun Young Women’s lesson — “Let’s have the YW values battle it out and see which one truly stands for moral dominance!”) There’s not a solution that satisfies all three corners of the triangle in every situation. How does that reality fit into our concept of heaven? If heaven heaven because God has figured out the trick of how to satisfy all three corners simultaneously? Or is heaven the place where the limitations of morality are navigated as best as can be, recognizing that even God can’t satisfy all three?

← Mormons in the US: A New Study
Power Imbalances and Dane’s Hierarchy of Christmas Presents →

97 comments for “The Irreconcilable Triangle of Mormon Political Values”