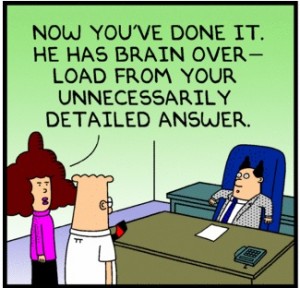 If there’s sufficient interest,  I will post some general notes, handouts and materials here instead of mailing out everything to my class. Handouts are pdf format and have live links embedded.

I felt the first week went well; in contrast to the last time I taught this, few students had a science background, and only 1-2 had previous experience with me. I introduced myself and established some formal bona fides. The more important informal trust that comes from personal experience and knowing someone will come over time, I hope. I had students introduce themselves, give a bit of their own background in terms of studies and interests (only one with hard science, several in literature and humanities, a few in business/finance), and express what had brought them to the class, what they hoped to discusses, or nagging questions or issues in Genesis. As expected, questions ran the gamut, but no one expressed a desperate struggle trying to “square evolution with the story of Adam and Eve that I had to take literally as a Mormon.” Time passed quicker than expected, and I moved into some intro material for the following week.

The purposes of the class dovetail with the approach, to understand Genesis as an Israelite might have and in process, answer some questions and make sure we’re asking the right kind of questions.

“Many Bible accounts that trouble the inexperienced reader become clear and acceptable if the essential meaning of the story is sought out. To read the Bible fairly, it must be read as President Brigham Young suggested: ‘Do you read the scriptures, my brethren and sisters, as though you were writing them a thousand, two thousand, or five thousand years ago? Do you read them as though you stood in the place of the men who wrote them?’ (Discourses of Brigham Young, p. 197-8). This is our guide. The scriptures must be read intelligently.” Elder John A. Widtsoe,  Evidences And Reconciliations section IV.3

The first thing to note is that most Israelites would have interacted with Genesis differently, in two concrete ways. First, most Israelites couldn’t read, and even if they could, it’s unlikely they could afford their own copies of Hebrew scrolls, time-consuming and expensive to produce. The written word simply was not preeminent, and they likely encountered scripture aurally. LDS paper on the topic. More importantly, they were natives of Hebrew and we have to deal with Genesis in translation. Consequently, we’re going to use several translations other than the KJV, which was an excellent translation…600 years ago. (Handout on Is the KJV a Good Translation?) There’s nothing wrong with using other translations, General Authorities have done so in the Ensign and General Conference, so the question becomes, what will we use? (Handout with examples of General Authority usage of other translations + recommended Genesis translations.) I passed around my Jewish Study Bible and Robert Alter’s Genesis volume, as well as a comparative translation handout of Genesis 1:1-3, which we’ll discuss more later. It’s useful to compare multiple translations, and I’ll be teaching the class primarily out of my Hebrew Bible.

Now, as we talk about Genesis and especially the creation accounts (as there are multiple in the Bible), we also need to talk about the relation between the KJV text, the Book of Moses creation text, Abraham creation text, and the temple. (We will talk about the temple explicitly in general and appropriate ways using what has been approved elsewhere, and sometimes implicitly.) In order to do that, we need to understand what the JST is and is not and common LDS assumptions about it. (Short handout on the JST.) Briefly put, many people assume the JST is simply Joseph Smith restoring text that disappeared from the Bible due to The Apostasy or not being “translated correctly.” While that may sometimes be the case, it is likely not so for most of it; regardless, we need to be aware of making simplistic assumptions. And this is necessary, because the Book of Moses is the JST to Genesis 1ff.

At that point, I still had time left, so we talked about the spectrum of  General Authority approaches to Genesis 1-4, with Brigham Young on the far left, Joseph Fielding Smith and Bruce McConkie on the far right, and David O. McKay in the middle. (Handout comes next week.) Basically, there’s no revealed consensus on how to read Genesis, though there’s certainly in more recent decades a trend in one direction. Without revelation, many views are possible, and we need to appropriately recognize the grey areas per BYU’s directions to RelEd professors. (Handout.) At that point, there was a good question about prophets and how teaching the class and doing my research has affected my testimony, and I talked about assumptions and the need to recognize both the human and the divine (i.e. inspiration and revelation) in our Church leaders; it’s just as dangerous to make assumptions of infallibility as it is to assume there is little to no inspiration among our leaders. Even Elder McConkie has said  that “With all their inspiration and greatness, prophets are yet mortal men with imperfections common to mankind in general. They have their opinions and prejudices and are left to work out their problems without inspiration in many instances.” (Mormon Doctrine, “General Authority”, IIRC) He humorously talked about himself from that perspective. (Old post of mine, Elder McConkie, Fallible Humorist? and unedited transcript of his address, Are the General Authorities Human)

For next week, the assignment is to read and compare the Genesis, Moses and Abraham creation accounts, looking for differences and similarities. Parallel text.

I had about 15 students, and 1 came because he saw the post on T&S! We had some good questions and discussion, talking about what to focus on. I’ll be making a tentative syllabus to hand out, as that seems to be the preference.

← Literary BMGD #4: On the Latter-day Dispensation
The Scholar of Moab: Interviduality →