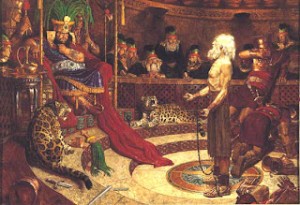 This is the third post in a series taking a broad view of the Book of Mormon (first, second). In this post I will discuss aspects of narrative encountered in the text. Not all scripture is narrative: consider the lengthy legal codes in the Torah and the moral exhortation found in James. Not all historical accounts are in the form of a narrative, although most history books written for the popular market are narrative histories. Most novels are in the form of a narrative, including historical fiction, which adds authorial speculation to large chunks of authentic history, often mixing fictional characters with actual historical figures and events.

Here is the key question: How does a reader distinguish between historical fiction and actual historical narrative? Authors of historical fiction may volunteer that information in the title or the text, as with Michael Shaara’s The Killer Angels: A Novel of the Civil War, a historical novel recounting the battle of Gettysburg. It won the Pulitzer Prize for fiction in 1975. Even absent such authorial disclosure, features of the narrative itself can also signal that the text is historical fiction. Sometimes narrative details are obviously supplied by the author rather than by historical records or observations. Here are the first few lines from The Killer Angels, recounting the activities of a spy employed by Confederate General Longstreet.


He rode into the dark of the woods and dismounted. He crawled upward on his belly over cool rocks out into the sunlight, and suddenly he was in the open and he could see for miles, and there was the whole vast army below him, filling the valley like a smoking river.

Even more indicative of historical fiction is when the text recounts the thoughts or even the dreams of a character, as in this short passage concerning John Buford, the Union cavalry commander who on the first day of the battle occupied and held the ridges northwest of Gettysburg until Union infantry arrived to reinforce his position.


Buford rode back to the seminary. He made his headquarters there. … He dismounted and sat down to rest. It was very quiet. He closed his eyes and he could see fields of snow, miles and miles of Wyoming snow, and white mountains in the distance ….

Both of the above quotations describe events as experienced by one character (limited to that character’s point of view) but narrated in the third person, the so-called “third-person limited point of view.” An even more limited point of view would describe only events and observations but not the thoughts or feelings of any character. This is the appropriate narrative stance for true historical narrative. In the other direction, a broader third-person point of view is “omniscient narration,” in which the narrator can know and relate any event as well as the thoughts and actions of any character.

Obviously, historians are not omniscient, hence omniscient narration is not appropriate for true historical narrative. Fictional narrative in general can select any point of view and can use first-person or third-person narrative, however the author chooses for the particular tale to be told. [Note 1]

The above discussion should help the reader pay more attention to point of view and voice (first- or third-person) when reading Book of Mormon narratives. This is certainly not a new idea. In 1995, one Edgar C. Snow, Jr. published “Narrative Criticism and the Book of Mormon,” reviewing how that approach “attempt[s] to isolate the narrative of a text from the real author of the text in an attempt to let a text speak for itself as much as possible.” Snow discusses the roles of implied author, narrator, narratee, and implied reader, as well as the implied author’s use of setting, events, and characters, but does not discuss point of view or focalization. [Note 2]

A more ambitious work is Mark D. Thomas’s Digging in Cumorah: Reclaiming Book of Mormon Narratives (Signature, 1999), which proposes to “focus[] on the internal literary features of the text and how these forms address its original nineteenth-century audience ….” Thomas adopts Robert Alter’s concept of narrative scenes, used by Alter to examine biblical narratives, to consider a variety of repeated Book of Mormon narrative scenes, such as warning prophets, conversion stories, and dying heretics. [Note 3]

Most recently, Grant Hardy employed concepts drawn from narrative criticism in his close reading of the Book of Mormon in his Understanding the Book of Mormon: A Reader’s Guide (OUP, 2010). Hardy highlights the narrative techniques employed by the three primary Book of Mormon narrators, Nephi, Mormon, and Moroni. This is a book any serious student of the Book of Mormon must read. The best quick introduction to the book is Hardy’s 12 Questions interview posted last year here at Times and Seasons (Part 1, Part 2). [Note 4]

Those using narrative techniques to look at specific Book of Mormon narratives generally bracket or set aside questions of authorship and historicity in order to focus on the text itself. Otherwise, the debate over authorship and historicity invariably overshadows the discussion of the text. The LDS position on authorship and historicity is clear and unequivocal. Elder Oaks: “The historicity — historical authenticity — of the Book of Mormon is an issue so fundamental that it rests first upon faith in the Lord Jesus Christ, which is the first principle in this, as in all other matters.” [Notes 5] Elder Holland, from his October 2009 General Conference talk “Safety for the Soul“: “I want it absolutely clear when I stand before the judgment bar of God that I declared to the world, in the most straightforward language I could summon, that the Book of Mormon is true, that it came forth the way Joseph said it came forth and was given to bring happiness and hope to the faithful in the travail of the latter days.”

Some Book of Mormon Examples

No doubt any reader familiar with some of the narrative concepts discussed above (and treated in much more detail in the cited references) will notice new and surprising features when reading Book of Mormon narratives. A book that does exactly this is Richard Rust’s Feasting on the Word: The Literary Testimony of the Book of Mormon (Deseret, 1997). Here are a couple of Book of Mormon examples I have noticed in my own reading.

First, the text is often explicitly aware of a limited point of view. While many titles that we now use to refer to Jesus Christ appear in 1 Nephi and the first chapters of 2 Nephi — such as “the lamb of God” or “the Savior of the world,” both used in 1 Nephi 13:40 — the actual term “Christ” first appears in a first-person statement by Jacob at 2 Nephi 10:3: “Wherefore, as I said unto you, it must needs be expedient that Christ — for in the last night the angel spake unto me that this should be his name — should come among the Jews, among those who are the more wicked part of the world; and they shall crucify him ….” The text here displays awareness that a speaker in the mid-sixth century, unlike a reader in the 19th century, would not know the name of Jesus Christ. A similar narrative device is seen at 2 Nephi 25:19 (where Nephi reports that “according to the words of the prophets, and also the word of the angel of God, his name shall be Jesus Christ, the Son of God”) and at Mosiah 3:8 (where King Benjamin reports that “he shall be called Jesus Christ, the Son of God, the Father of heaven and earth, the Creator of all things from the beginning; and his mother shall be called Mary,” information that in 3:2 he states was “made known unto me by an angel from God”).

Second, the Book of Mormon does at times use omniscient narration, such as the following passage recounting the sea voyage of the Jaredites. At Ether 6:4-6, Moroni’s narration becomes progressively broader as the passage develops:

There are no doubt dozens of examples like these that an attentive reader will notice. What features have you noticed in Book of Mormon narratives?

1. Lacking a degree in English or literature, I am relying on Chris Baldick’s Oxford Concise Dictionary of Literary Terms (OUP, 2d ed., 2001) and Jonathan Culler’s Literary Theory: A Very Short Introduction (OUP, 1997), especially Chapter 6, “Narrative,” for terms and concepts. Mary Klages’ Literary Theory: A Guide for the Perplexed (Continuum Books, 2006) is very good for contrasting structuralism with post-structuralist literary criticism, but provides little discussion of narrative. For a discussion aimed particularly at scriptural narrative, the interested reader is directed to Frank Kermode’s The Genesis of Secrecy: On the Interpretation of Narrative (Harvard Univ. Press, 2006).

3. Mark D. Thomas, Digging in Cumorah: Reclaiming Book of Mormon Narratives, Signature Books, 1999. Quotation from page 2. In Chapter One, Thomas discusses his methodology. In addition to narrative scenes, he considers narrative formulas (such as “once upon a time” and “they lived happily ever after” in fairy tales) and biblical parallels when examining Book of Mormon narratives. For a mildly critical review of the book (“Though better than most other LDS revisionist approaches to the Book of Mormon, Thomas’s book seriously underestimates the complexity of the scripture — whether for ideological reasons or just because of the writer’s incapacities as a literary critic isn’t clear yet.”), see Alan Goff, “Scratching the Surface of Book of Mormon Narratives,” FARMS Review, 2000 (Volume 12, Issue 2), pages 51-82.

4. Grant Hardy, Understanding the Book of Mormon: A Reader’s Guide (OUP, 2010). Like other treatments discussed above, Hardy brackets questions of authorship and historicity while focusing on the literary and narrative features of the Book of Mormon text.

5. Elder Dallin H. Oaks, “The Historicity of the Book of Mormon,” an address delivered to the 1993 FARMS Annual Dinner in Provo, Utah. Transcript posted at the Neal A. Maxwell Institute for Religious Scholarship site (linked above), accessed January 27, 2011.

12 comments for “The Book of Mormon as Narrative”