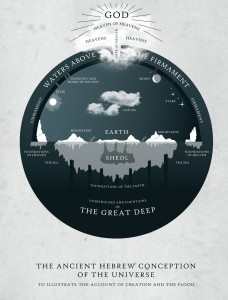 (updated!) Attendance down a little this week; I know one student had a date, the weather was poor (no one likes to travel in the rain), and so on, but I also heard that last week was too much for at least one person. But, I felt this week went quite well, and we finally got into Genesis itself. As per the syllabus, class today was divided in two parts. And due to my own schedule and time commitments this week, I’m afraid my notes here are much rougher, less complete and posted later than I’d wish.

I. Tools part I

We went over a handout about language and dictionaries, talked about why Webster’s modern dictionary isn’t useful, how to use Strong’s Concordance, where to get it for free, and what’s wrong with it, then some resources that you can use once you understand Strong’s and have the number for a word.

Here’s the handout (ask if something isn’t clear), which came with some relevant sample pages from Strong’s, where we looked at “abide” as exemplar (those pages not uploaded) and the relevant chapters from Jim Faulconer’s excellent short Scripture Study: Tools and Suggestions “English Historical Dictionaries” for D&C/Book of Mormon/Pearl of Great Price; Here’s his chapter for dealing with Greek and Hebrew, “Doing Bible Research Without Knowing Greek or Hebrew.” Now, I go beyond Faulconer, and suggest using great caution with Strong’s. It’s very outdated, and doesn’t give useful definitions as much as short translational equivalents. So, I provided a sheet with other resources keyed to Strong’s that are better. Here are samples. Vines; Mounce; TWOT; TLOT; NIDOTTE (Thanks to a fellow Logos user for providing me with samples from the resources I don’t own.)

Several students, as it turned out, were already familiar with and used Strong’s.

We then turned to Genesis 1 and Enuma Eliš.

Enuma Eliš is often called the Babylonian Creation Account or Epic, but that misleads into thinking that its purpose was simply to convey information about creation. (This assumption is likely carried over from assuming the same thing about Genesis, and is equally false.) Enuma Eliš, rather, explains how Marduk became the chief deity of the Babylonian pantheon.

When first published, the similarities between Enuma Eliš and Genesis 1 were so obvious that (combined with other reasons), some claimed that Israelites simply borrowed Genesis from Enuma Eliš. Since then, more nuanced views have prevailed. While there is still no real consensus on the relationship, three things are commonly agreed upon; The roots of Enuma Eliš long predate the Israelite version, one cannot study Genesis seriously without taking Enuma Eliš into account, and at the very least, Genesis and Enuma Eliš  “breathe the same air.”Here is  Enuma Eliš from the Context of Scripture (You can see the cuneiform of one version here in pdf, with explanation of the first few lines.  (I used to have a nice Enuma Eliš mug from Eisenbrauns…)

We did a very selective summary of Enuma Eliš, and pointed out that the pre-creation combat with the watery chaos/deity/sea monsters therein is also found in the Bible. (Handout of passages taken from this post.) We then looked at Genesis 1 and saw that although multiple elements of Enuma Eliš are found there in the same order, there is very clearly NO pre-creation battle, and those things which are warring deities in Enuma Eliš are simply creations of Israel’s God in Genesis 1. Specifically (and selectively), we begin with temporal clauses (“When on high…” and “When God began creating the heavens and the earth), pre-existent cosmic waters (Tiamat/salt water, tehom/”the deep”), darkness, and wind/spirit. The waters are then separated, a solid roof (Tiamat’s hide, the raqiya/firmament) put on to keep out and restrain those waters from entering into this space, and this is the general conception of the universe or cosmic geography among both Israelites and their neighbors.

(Edit: Even Deseret Book on Genesis obliquely mentioned Enuma Eliš, in Jehovah and the World of the Old Testament.

“the power and significance of these stories [of creation in Genesis] can be best appreciated when they are compared with the ancient creation stories that were known in cultures surrounding ancient Israel. In the last 150 years, archaeologists working in the Near East have uncovered hundreds of thousands of records from the ancient world.  Scholars have identified in these records many examples of creation stories from Mesopotamia, Egypt, and Canaan that give us insight and understanding of the ancient worldviews about creation.”

What is the doctrine here? From an Israelite perspective, especially one living in or under Babylonian rule and influence, the doctrine was that Israel’s God was The God, that these other things were not gods at all. This was Doctrine with a Capital D, centrally important to their concerns. Especially when Israel had been subued by Babylon and the temple destroyed, it was a real theological challenge. Had Marduk defeated Yahweh? Was Yahweh indeed God? What had happened? We tend not to understand the attraction of polytheism, or the illogic of monotheistic religion then, since it is mostly what westerners encounter today, sohere is a brief defense of polytheism. Today, polytheism doesn’t make a lot of sense to us because we live in a different culture. So here’s a useful analogy. You all use certain services and functions in your daily life. You have water. You have your recycling pickup. You have your electricity, you have your plumber, you have your car mechanic, your cable TV, your Internet access, your handyman. Now, imagine that you move into a new house. And the same guy comes and hooks up all of these services. Imagine that every service in your new house came from the same company. And not only the same company, but the same guy. And that this guy was the local mechanic, grocer, policeman, garbage service, and doctor. You would have trouble believing that one person could do all these things. And that is basically the situation of ancient near Eastern people. We think of the cosmos as a machine that God runs or set up. Ancient near Eastern people, by contrast, associated a different god with each service, function or aspect. The deity was the function, and vice versa. Ra/Re is both the Sun and Sun God. There were weather gods, fertility gods, local regional gods, etc. How could one deity be in charge of everything? And what if he really wasn’t? What if your child died or your crops failed because you’d failed to appease some other God? (Think of Paul and the altar to the Unknown God here.)

Some of this is reflected in the Bible. It might surprise you to find out that a volume called Dictionary of Deities and Demons in the Bible (a prominent academic reference volume) runs to nearly 1000 pages. It was inconceivable to think of one God performing every function, but that is what the Israelites proclaimed, even though many of them couldn’t quite maintain that exclusivist faith at times.

We talked of this more in depth, and in several other ways. I’ll try to get my notes back up to snuff next week.