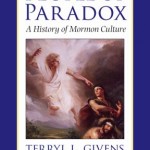 Terryl Givens’ recently wrote about the American compromise with Mormonism, whereby Mormons agreed not to be so radical as to entirely alienate themselves from American society (i.e., ditch polygamy and our lovely Deseret) in exchange for the U.S. ceasing its explicit campaign to eradicate us. He describes the unwritten contours of that compromise as consisting in a willingness to accept and even promote the various cultural achievements of Mormonism (e.g., our choir, football, family focus), while agreeing to shelve any serious engagement with our theology. One can hear the variation on a popular General Conference theme when he writes: “In opting to emphasize Mormon culture over Mormon theology, Mormons have too often left the media and ministers free to select the most esoteric and idiosyncratic for ridicule. . . . But members of a faith community should recognize themselves in any fair depiction.” The upshot is that Mormons themselves need to help define their public image now that Presidential politics have disturbed our great Compromise and open season’s been declared on our theology.

According to Givens, here are the theological starting point for any serious engagement:

1. God is a personal entity, having a heart that beats in sympathy with human hearts, feeling our joy and sorrowing over our pain.

2. Men and women existed as spiritual beings in the presence of God before progressing to this mortal life.

3. Adam and Eve were noble progenitors of the human family, and their fall made possible human life in this realm. Men and women are born pure and innocent, with no taint of original sin. (We find plenty on our own).

4. God has the desire and the power to save, through his son Jesus Christ, the entire human family in a kingdom of heaven, and except for the most perversely unwilling, that will be our destiny.

5. Heaven will principally consist in the eternal duration of those relationships that matter most to us now: spouses, children, and friends.

None of these beliefs is relevant to a political candidate’s fitness for office. But they should be the starting point for any serious attempt to get at the core of Mormon belief. And there should be no compromise on that point.

It strikes me as just as good a list as any. And of course it’s very important not to overwhelm our interlocutors when striking up the public conversation. But drawing up a list of this sort, particularly in the absence of Mormon creeds, is bound to be at least a little controversial. So just for fun, here’s my two questions:

1. Is there anything on Givens’ list that you think ought not be there (keeping in mind the specifics of what he’s doing)?

2. If you had an audience with an attention span and interest, what other points would you want to offer?

To kick things off, I’ll say that I’m happy with what’s on the list, but think that just as important is our (perhaps nuanced) materialism, our humanistic-utopian theological commitments (which includes our commitment to education), and our belief in (hierarchically constrained) dialogic revelation (something that Givens himself has already invested a lot of time in discussing).

21 comments for “Reassessing the theological side of the Compromise”