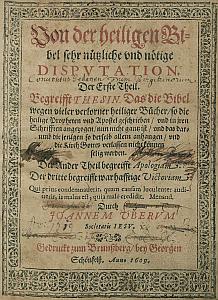 In 1609, Johannes Uber published the first part of his Very Useful and Necessary Disputation Concerning the Holy Bible (Von der heiligen Bibel sehr nützliche und nötige Disputation, VD17 1:050537Y) in which he argued for two points. First, that the Bible was no longer whole “because of the many lost holy books that the holy prophets and apostles wrote and referred to in their writings”; and second, that therefore those who leave the Catholic Church and rely only on the Bible cannot find salvation. Uber divided the work into five sections:

Uber’s Disputation anticipates by two centuries the appearance of lost biblical books in Mormon discourse, providing an example of a Latter-day conversation that continues medieval and early modern dialogues. My impression is that we typically borrowed the Protestant side of confessional polemics, but in this case we seem to have adopted something closer to the Catholic argument. For Mormons, the lost books are usually cited as evidence that continued revelation is necessary, although they are also cited as a sign of apostasy in Late Antiquity or the Middle Ages, to which Johannes Uber would no doubt have taken great exception.