Sunday night, I was at a meeting, the intent of which was to help us each get a name to take through the temple. Bandwidth problems significantly detracted from our ability to do so, but, as I was playing on FamilySearch, I discovered something incredible: I’m descended from royalty! Don’t believe me? Check it out:

See? Proof irrefutable. Mrs. Joan Brownson, my great-great-great-etc.-grandmother was the daughter of the King and Queen of England.[fn1]

Except that it didn’t feel quite right. So I dug a little deeper. Under “Parents and Siblings,” I saw this: 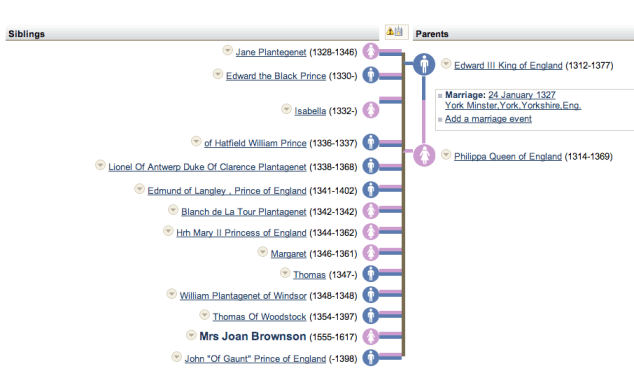 So it turns out I’m doubly awesome. Not only am I descended from Edward III King of England and Philippa Queen of England, but my particular ancestor was born almost 200 years after her mother died![fn2]

[fn1] It does, however, bring up a skeleton in my ancestral closet. It appears, based on somebody’s genealogical work, that Richard Bronson married his mother. Because his wife and mother not only have the same name, but the same dates of birth and death. So maybe that kind of relationship undoes the coolness of being descended from royalty.[fn1.1]

……….[fn1.1.1] Okay, because I only discovered these names tonight, I guess I don’t technically know he didn’t. But I’m pretty confidant he didn’t, at any rate.

[fn2] I’m going to put the only serious part of this post in a footnote: how does one get this fixed on FamilySearch? It seems to show the last information, so I could fix it by putting in the correct information. Except that I don’t have the correct information and, right now, don’t have any way of finding it.[fn2.1] So if I replaced it, I’d just substitute one obvious error for another. (As an aside, discovering this remarkably obvious error, besides royally ticking me off, has significantly dampened the budding enthusiasm I had for family history: I can’t go through and correct all sorts of errors that have been perpetuated, but if I don’t, I’ll just continue the errors. Moreover, even if I were to go through and correct them, someone else could just follow up on it and muck up what I had, hypothetically, done.[fn2.1.1]

…..[fn2.1] Yes, I know that I could devote a ton of time trying to research family history in 16th-century England. But I’m not going to; I have other priorities calling for that time.

……….[fn2.1.1] I’ll take encouragement, btw; I’ve got another family history post that is much happier, and that was the source of my excitement. But I can’t get there until I get past this.