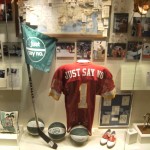 We have had horrible luck while traveling with finding church services through Mormon.org. On one trip, the address it gave didn’t exist. (How do I know? After nearly an hour of looking, asking people in the shops nearby, meeting up with friends who were also looking, well, we never found it.) On another, church started an hour after Mormon.org claimed it did. So I’m gun-shy about trusting Mormon.org when I’m looking for church services.

Which is why, last summer, on vacation, when my wife saw an older couple wearing missionary name-tags, we decided to confirm when and where the church met. Turns out that they weren’t assigned to that particular area.[fn1] Still, we started talking. At one point, the husband mentioned something he’d been asked to do, and said, “You don’t say no to a Seventy.”

Let me interrupt myself right here to emphasize that it was a throw-away line. They had been asked to report on establishing some program or committee or something. He was not implying that, if a Seventy asked him to do something immoral or illegal or even questionable, he would mindlessly obey. I assume that, if pressed, he would admit that he would say no in that situation, except that he couldn’t imagine that situation actually happening. But we were in a pleasant social situation, he was a pleasant missionary, and there was no point in pressing him on a laugh-line.

I’d been thinking about writing this post for a while,[fn2] but in light of Ronan’s excellent post, which makes clear that some people seem to believe that Mormons literally do not say no to a leader,[fn3] it seemed like an opportune time.

See, I suspect that the attitude of we don’t say no is fairly prevalent in the Church. Not, of course, because we’re mindless zombies,[fn4] but because of some combination of belief that our leaders are inspired in their choices and an aversion to conflict. But that seems like a bad organizational trait, if it’s true. Not bad because we’ll commit every evil asked of us, but bad because the Seventies (stake presidents, bishops, RS presidents, etc.), though inspired, are human too. And if we just do whatever is asked of us, and accept that they have all knowledge and inspiration, they won’t get decent feedback to know what works, what doesn’t work, and how the average person will respond to their requests/ideas.

So let me know:

(a) Do we say no to Seventies (or better, is there a level at which we stop providing honest feedback)?

(b) Should we ever say no to Seventies or whomever (with the caveat that I’m assuming we won’t be asked to do anything immoral, though we may be asked to do something inefficient)?

(c) If we ever should, how should we go about saying no?

[fn1] Actually, they weren’t even assigned to the mission we were in; they were, however, headed home in a week or two, and were doing some sight-seeing before they left.

[fn3] If you’re one of those people, btw, this may not be the comments section for you. If you actually believe that we will obey every edict that comes out of Salt Lake, you either don’t know us very well (see, e.g., many wards’ home and visiting teaching numbers contra this), you’re an ideologue, . (Sorry—as my daughter tells me whenever she hears me say “idiot,” that’s really not a nice thing to say.)

[fn4] Though that could be kind of cool.