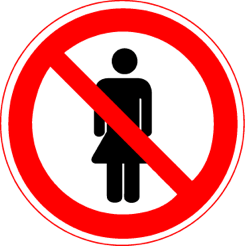 In the name of full disclosure and in order to clarify my agenda, if any, note I tend to agree with Ralph Hancock a great deal of the time and to disagree with Joanna Brooks about as often. In addition, even before I began blogging in 2003, I wrote for Meridian Magazine. (I was one of the original three in the “Circle of Sisters.”)

In his recent, two-part review of Joanna Brooks’ The Book of Mormon Girl, Ralph Hancock responds to Brooks’ negative response toward gender differentiation in the church.

While I believe it minimizes this differentiation—with women being excluded from holding the much-touted, much-taught “eternal power and authority of God”—by calling it merely “role differentiation,” Hancock made a particular statement that has continued to run through my mind.

Those who are not simply content with accepting the Church’s authority on such matters might thus consider the possibility that Priesthood responsibilities and rites of passage serve purposes particularly appropriate to the making of boys into men and to the effective and wholesome definition of manhood…It may be, that is, that, on the whole, women are more immediately or naturally in touch with the meaning of their womanhood than men are with their manhood, and thus that boys need certain social structures and incentives that differentiate them from girls and women.

Assuming that his claim that there actually is an authoritative reason for this “other priesthood ban” than tradition, the argument seems to look like this:

Brooks: Women should have the priesthood just as men do.

Hancock: No, the priesthood is important in developing men.

Either Hancock’s statement is a big red herring (that has succeeded in distracting people from the real issue), or Hancock actually thinks that excluding women, subordinating women, dominating women, or [fill in your own term] women, has something to do with the importance of the priesthood for men.

So, why does keeping women out make the priesthood awesome sauce for men?

← Just Say No?
Notes: Mormonism and the Internet →

122 comments for “No Women Allowed: Why Exclusion Makes the Priesthood Awesome”