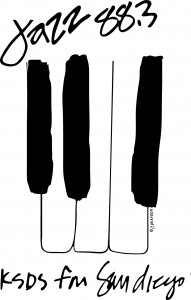 I recently bought a couple wireless speakers so that I could listen to my music collection away from my computer, without earphones. It turns out that these speakers not only play music off my computer, though: they’ll also allow me to listen to, among other things, podcasts, Pandora, and any number of radio stations, as long as the radio station broadcasts online.

Although I got the speakers primarily with the intent of listening to my purchased music, I find that I use them mostly to listen to KSDS. I discovered San Diego’s jazz station in high school, but its broadcast was weak enough in the North County where I lived that I could generally only listen in my car if I was driving in a particular direction (south, maybe?). The station boosted its signal while I was in college, and I listened frequently when I was visiting home. For my money, KSDS is the best jazz station in the U.S. (at least, based on my experience in New York—where, seriously, the only jazz station is actually broadcast from Newark—Provo (which only played at night), D.C., and Chicago).

But, as much as I love the station, it does play songs I don’t enjoy. And it doesn’t play songs I would love to hear. I could get a more-tailored playlist from my own collection, from Pandora’s algorithm, or from Spotify’s nearly unabridged array of recordings. So why, in light of all the music and technology, go with a radio station?

Because it’s curated. The DJs at KSDS love the music they play[fn1], and they have an encyclopedic knowledge of the genre, from its beginnings to the latest records. They have opinions, quirks, and preferences. True, Pandora can potentially provide me a serendipitous find,[fn2] but it often feels more like a classic rock station, playing the obvious choices. Almost every time I listen to KSDS, I discover something new.

I’m beginning to think that church meetings function in much the same way. The talks and lessons and comments from class members are those people’s curated versions of what the Gospel means; they display the speakers’ quirks, interpretations, and lived experience. Sometimes those quirks, interpretations, and lived experience don’t resonate with me. Sometimes they bother me. Sometimes I feel like I could find more meaning by studying my scriptures on my own, focusing on the meaning that I find in them. But sometimes somebody’s curated experience with the Gospel provides me with a serendipitous find, and I discover meaning that I could not and would not have discovered on my own.[fn3]

I can still listen to my mp3s when the mood strikes; I can trust in Pandora, too. I can study on my own, using the tools that I bring to the table, to supplement what I get at church. But the curated experience, both in my musical and my religious life, is irreplaceable.

[fn1] Seriously. Between college and law school, I moved back to San Diego for several months and was asked to play piano for the Marine Corps Recruiting Depot branch. Every Sunday morning I drove down to a soundtrack of big band swing; the DJ, it turns out, had complained that the station didn’t have any big band shows, and was invited to put one together himself.

[fn2] I heard a version of “Subterranean Homesick Blues” on Pandora several years ago that I loved; sadly, I can’t remember who it was, and I haven’t been able to recreate the series of songs that led to it.

[fn3] Yes, I realize I’m leaving out ordinances. But if our only purpose in attending church was to perform ordinances, well, I could cut the three-hour block by about two hours and 45 minutes.

← Exploring Mormon Thought: Love
You and Your Righteous Religious Mind →

15 comments for “Internet Radio and the Church”