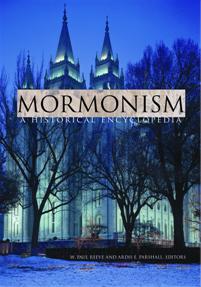 It is published as a reference work, but you can read it like a book, albeit a book of essays: Mormonism: A Historical Encyclopedia (ABC-CLIO, 2010; publisher’s page), edited by W. Paul Reeve and Ardis E. Parshall. Listing at $85 ($68 on Kindle), it might not find its way onto your bookshelf until a trade paperback version comes out in a few years, but at the very least it puts a very accessible LDS history reference on the shelves of America’s libraries and newsrooms, featuring 140 entries covering individuals, places, events, and issues. I stumbled across a library copy that was in the stacks and could actually be checked out rather than being secured behind the librarian’s firewall (that is, placed in the reference section). If you are so lucky, do the right thing and take it home for a few weeks.

At 394 pages with 12-point font (not the tiny print one sometimes finds in reference volumes) it might seem a little light for the genre, but that adds to what you might call the readability of the book. The first of four major sections presents six 10-page essays covering the entire span of the Mormon experience, essentially a short but dense course in LDS history:

As this list illustrates, the authors for essays and articles in the book include seasoned scholars, younger scholars, and independent scholars (those without a present academic affiliation). Bloggers are well represented: Julie Smith (Mormon Scripture), Nate Oman (Mormonism and Secular Government), Brad Kramer (Local Worship), J. Stapley (Mormon Missiology), Samuel Brown (Mormonism as Restoration), Blair Dee Hodges (Correlation), Bruce A. Crow (Mormon Battalion), just about everyone on the perm roster at Juvenile Instructor, and of course Ardis, who like her co-editor wrote about a dozen short entries as well as the longer historical essay listed above.

I am not so bold as to try to critique any particular entry or even the selection of topics — I’m sure there were dozens of potential entries that weren’t included simply because you can’t include everything in a single volume. A full table of contents for the book is available at the book’s Amazon page. The fourth section of the book, Issues, is really outstanding: 23 short articles of about five pages each on such topics as Mormonism and Blacks (by Margaret Blair Young and Darius Aidan Gray), Mormonism and Race (Armand Mauss), Mormonism as a World Religion (David Clark Knowlton), and Non-Mormon Views of Mormonism (Jan Shipps).

I hate to spend the whole review speaking in generalities without sharing a little bit of the content of this enlightening volume, so I will end with a second list giving one surprising fact or statement drawn from the biographical articles on each President of the LDS Church. I guess I’m hoping to show that these aren’t just Sunday School summaries — there really is a lot of information in the book that many readers, even well-read ones, will not have encountered before. For all presidents except Joseph Smith, I will note the years served as President of an organized First Presidency, along with the author of each article.

My advice: beg, borrow, or buy this book. You will enjoy it.

← Exploring Mormon Thought: Christ
“For I am not Embarrassed by the Writings of Mormonism …” →