The kids and I are decorating Christmas gingerbread men when the phone rings. I sigh, knowing that even a few minutes’ interruption could spell disaster in a kitchen full of rowdy kids wielding tubes of frosting. I head toward the phone, snatching the sprinkles away from twelve-year-old Ben, who’s sprinkling them straight into his mouth. My mother’s name shows on the caller ID; I pick up to tell her we’re in the middle of a mess and I’ll call her back. “I need you for just a minute,” she says, and her numb voice stops me short. When I ask her what’s wrong, she clears her throat and says, “I have some bad news about your brother.”

My brother. George. He is my only blood sibling, elder by two-and-a-half years. He was my ally when our parents’ marriage ended, my witness in the troubled wake of our mother’s remarriage, and my sole partner in the subsequent dance between two families separated by divorce. On holidays we’d make our way through the maze of cheek-kissing Greek relatives crowding our Yia Yia’s living room. Together we’d survey the buffet table, snitching pieces of roast lamb and baklava from the shining silver platters. Together we’d doze in our father’s smoke-filled Oldsmobile on the long drive back to our home. Dad would drop us off across the street a half-block away from the house, because he couldn’t tolerate any closer proximity to our mother.

But we stayed close, George and I. Once a month we navigated an overnight stay at our father’s dark townhouse in Capitol Heights, where we holed up in the wood-paneled den to watch Love Boat and Fantasy Island and eat Jiffy-Pop. During family vacations on the Delaware shore we spent days crashing through the green-gray Atlantic waves, popping bubbles of seaweed and poking jellyfish with sticks; in the late afternoons we’d roam the tar-creased boardwalk, buying crappy novelties from the beachfront five-and-dime and wasting hours in the arcades, where I’d faithfully stand at George’s elbow and watch him play Spy Hunter and Galaga.

Even after he outgrew family vacations he drew me to his side again and again, often sequestering me to listen to whatever music he was currently obsessed with: Rush in the early eighties, Metallica in the late; Pink Floyd and Led Zeppelin throughout. I loved it all, because he loved it. Each track is a memory: “Fly By Night” is the beach house bedroom we shared, with cheap prints of Gainsborough’s Blue Boy and Lawrence’s Pinkie on the walls. “Brain Damage” is his deodorant’s musk-wood scent, which permeated his bedspread and drapes. “Over the Hills and Far Away” is the day he drove our mother’s blue Ford van home from an explosive family therapy session; dizzy with rage, I picked a spot on the back of George’s gingery head and stared at it, like a dancer spotting for a turn, while Robert Plant yowled poetically through the stereo speakers about following the open road. 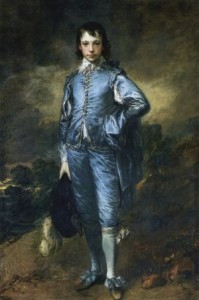 The last time I saw George he was driving a van, a battered pea-green camper-top VW belonging to the guy riding shotgun, a deadhead with stringy black hair and vacant eyes. It was 1997, years since we’d crossed paths during one of my trips to our hometown. The depression we’d both suffered from a young age had followed us into adulthood, but while my life took a sharp upswing after leaving home, his continued its downward spiral, moving from substance use to abuse and addiction. He blew out a knee in a car accident just weeks before he was to join the army, and then blew the $60K insurance settlement that could have given him a life, leaving him broke and broken, drifting from state to state and sleeping on friends’ couches. I knew we had grown apart, but until he pulled that van into my driveway I didn’t realize just how different our lives had become: I had a house, three little kids, a stable marriage and a temple recommend. He had a rucksack of filthy clothes, a box of Grateful Dead bootleg tapes, and a pal named Jelly.

The two men stank, so when they asked if they could do some laundry I readily led them to the basement, where they stripped naked right in front of me and put on the least dirty clothes they could find in their bags and threw the rest in the washing machine; when I came back downstairs to check the cycle, the wash water draining into the utility sink was muddy brown and heavy-looking, thickened with earth. I knew they must be hungry, so I made them vegetarian sandwiches—grilled provolone on rye, my specialty—and watched them devour several each. My kids watched too, from a slight distance, shy in the company of this uncle they didn’t know. I wondered if George noticed how much two-year-old Ben looked like our father, but I didn’t get a chance to ask—as soon as the laundry was done, they hit the open road. I waved goodbye from the front porch, balancing the baby on my hip and holding Ben’s hand to keep him safe as the van pulled out of the driveway.

The crash came two years later. Nevada, fall of 1999. Two people died; a strict new DUI law held George accountable. He received two prison sentences, each two-to-twenty years. After serving his minimum four years, he was released on a writ of habeas corpus due to controversies surrounding the new law and misconduct by his attorney, who was disbarred soon after George’s trial. But now, just eighteen months later, in December of 2006, the state’s appeal has been granted and my brother has been summoned back to prison to finish his full sentence, which might last longer than his life.

But he hasn’t gone back. This is what my mother calls to tell me: instead of complying with the warrant, George has disappeared. Nobody knows where he is headed—Canada? Mexico? Nobody knows when, or if, we’ll ever hear from him again. I stand in the middle of my kitchen, hands itchy with flour and apron smeared with butter, with my children chattering in the background and the smell of cinnamon billowing from the hot oven and gobs of frosting hardening on the countertops, while my brother runs scared, over the hills and far away, looking for a cave to hide in.