III. Day of the Dead

When I come inside from lighting the jack-o-lanterns, the boys are waiting for me.

“When are we going to go?” Sam asks from behind the white sheet of his ghost costume.

“Yeah, let’s go,” says pirate Matt, swinging his pumpkin-shaped candy bag. He is eight and Sam is six. None of our older four kids are willing to be seen trick-or-treating with their parents. Matt and Sam would actually be pleased to have both of us tag along, but taking a long stroller ride in the dark is not our preschooler’s idea of a good time, so one of us will stay home with him while the other walks the neighborhood. I know Reed will refuse to take the boys more than a few blocks, so because I am I good mother, I volunteer. And because I am a bad mother, I bring along my iPod, placed strategically in my jacket pocket so that I can easily hit pause if the kids stop thinking about candy long enough to talk to me.

I’ve forgotten that kids can think and talk at once, and they keep up a steady stream of chatter from the moment we step off our porch. It’s a glorious not-too-cold Halloween night, with crisp autumn air and a magical indigo sky, and as soon as the boys are occupied at the neighbors’ door I scroll through the iPod menu to find the right music for the occasion. Although my tastes have mellowed as I’ve aged, I’ve been in a Led Zeppelin revival phase for the past few weeks, and they’ve got the perfect song: “The Battle of Evermore,” a delicate ballad set to impossible melodies on mandolin and Jimmy Page’s three-necked guitar. 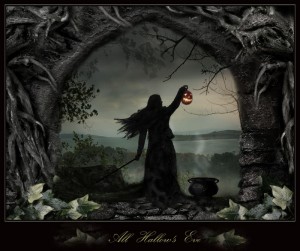 The queen of light took her bow and then she turned to go
The prince of peace embraced the gloom and walked the night alone.
The dark Lord rides in force tonight, and time will tell us all–
Oh, throw down your plow and hoe, rest not to lock your homes;
Side by side we wait the might of the darkest of them all.

Matt and Sam scamper up to show me their loot before running off to the next house. Supposedly, the treat-begging echoes the medieval traditions of All-Hallows-Even, when cakes and wine were set outdoors as offerings for the deceased, and All Souls’ Day, or the Day of the Dead, when the cakes would be distributed to children and poor folk who went from door to door singing and praying for the deceased in purgatory. Every cake eaten represented the freeing of a soul from that limbo state between heaven and hell.

Somehow I doubt the Twizzlers and Snickers in the kids’ pumpkin bags will hold the same redemptive value, but I won’t begrudge them their annual candy fest, especially now that their oldest siblings are outgrowing the fun. Ben, now fourteen years old, no longer presides over the post-game candy trade, cutting shrewd deals and scamming the littlest players like my brother George once did. Diagnosed with clinical depression two years ago, Ben is withdrawing from our family circle more swiftly than I anticipated. He still talks to me about music and school and friends, but I can no longer hold his hand to keep him safe, as I can with Matt and Sam. Watching the two little boys gape at the full-sized candy bars handed out by one generous neighbor, I realize they will never be more open to me, more eager for my company, as they are now.

On impulse I look up at the night sky. It shows few stars due to the artificial light and pollution of the Salt Lake Valley, but I can see the telltale angles of the cup of the Big Dipper. Large trees are blocking the full view, so I change my position on the sidewalk, and Matt and Sam return from their latest candy conquest to find me peering into the distance. I try to show them what I’m looking at, but pointing doesn’t quite do the job. With the help of reference points from rooftops and tree limbs, Matt finally spots the constellation. Sam does too, or at least pretends he does. Matt’s eyes are glowing with  discovery, and I’m thrilled for him. But I’m also sad that he doesn’t know how much else is up there, sad that the only Milky Way he knows is in his pumpkin bag.

I want them to see the stars. I will take my kids camping, Matt and Sam and anyone else who still looks when I point—last time we went, years ago, they were too little to stay up past dark. Better yet, I will take them to Nutty Putty Cave, where they can experience not only the vastness of the sky but the closeness of the earth, and know both through contrast. Rather than just showing them the stars, I will first give them the adventure of crawling underground like the worms and ants they study in our backyard. Then I will lead them out of the stifling narrowness into the starry brilliance of a clear night, and they will see what I saw, and know what I know.

But as I follow the boys up our street and watch them break into a run at the sight of our house, there is much I do not know. I do not know that three weeks hence, on November 24, 2009, a man named John Edward Jones, age twenty-six, a student at the University of Virginia’s medical school spending Thanksgiving with his family, will join eleven companions for a trip to Nutty Putty Cave. I do not know that the six-foot-tall, 190-pound man will separate from the group to successfully traverse a narrow cavern called the Birth Canal only to become lodged in a pinch point at its far end, a cervix eighteen inches wide and ten high. I do not know about the twenty-seven-hour rescue attempt which will follow, involving more than 130 volunteers, and that Jones will hang headfirst, 125 feet below ground and 700 feet into the cave, for more than eight hours before a rope-pulley system will ease him free and lift him to an upright position. I do not know that a failure in the rope system will soon drop him back into the pinch point, where he will slowly suffocate from pressure to the chest, and that he will die around midnight on November 25, leaving behind a wife and a baby daughter.

When I do come to know these things, some time later, I will also know that due to the extremely high cost and danger of retrieving the body, the family agreed with state and local officials to entomb it in the cave, and that, despite hundreds of protests, the cave’s main entrance was sealed shut, in addition to the passageway holding the remains. The way in and out is now blocked by a concrete plug. A stopper in the blowhole. A stone sealing the tomb.

Visitors might regain access to the main entrance at some point in the future, but even if the cave reopens I know I will never reenter it. I could not force myself to squirm through its narrow openings while remembering the botched delivery of John Jones. I could not guide my boys down the rocky slope of the Big Slide with the knowledge that one man never climbed back up again. I could not sit with them in the inky oblivion of the Big Room, so near the corpse of the young father, hanging like a soul in purgatory, quietly decomposing in the dark humidity of the Birth Canal.