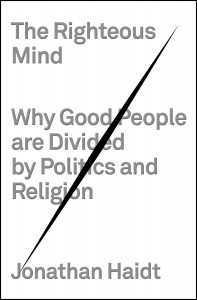 Psychology has come a long way the last couple of decades. Instead of seeing us coming into the world with a mind like a blank slate, psychologists and cognitive scientists are discovering through cleverly designed empirical research that we are born with a preloaded mental operating system. It predisposes us to see the world like emotional, opinionated, tribal human beings rather than like rational, logical robots. You can get the whole story, with special emphasis on how moral systems and individual moral convictions are formed, in Jonathan Haidt’s new book The Righteous Mind: Why Good People Are Divided by Politics and Religion (Pantheon Books, 2012; publisher’s page; official book page).

I’m not going to try to summarize this well-organized and well-edited book in any detail. The roots of Haidt’s approach go back to the sociologist Durkheim (“social facts”) and the biologist Darwin (“group selection”). Haidt’s descriptive model of human morality draws on the results of many recent empirical researchers (cited and discussed in the text) as well as Haidt’s own research program.

In Part 1, Haidt establishes this simple proposition: Intuitions come first, strategic reasoning second. He agrees with Hume’s view that reason is the slave of the passions. In Part 2, Haidt defends this claim: There’s more to morality than harm and fairness. Besides care/harm and fairness/cheating, concepts that in the individualistic West generally define our sense of justice or a just society, his research identifies four other moral axes that inform human moral convictions more generally: liberty/oppression, loyalty/betrayal, authority/subversion, and sanctity/degradation. [See Haidt’s Moral Foundations Theory website for descriptions of each moral axis.] In Part 3, Haidt investigates why humans are so inclined to form groups, and finds that morality (and religion) play a functional role that he summarizes in this phrase: Morality binds and blinds.

Religion Is a Team Sport

That’s the title to Chapter 11, which is not necessarily a central chapter for the book as a whole but offers the best material for a T&S blog discussion. Haidt first reviews what the New Atheists (Harris, Dawkins, Dennett, and Hitchens) have said about religion over the last ten years: It is an irrational system of beliefs about supernatural agents that is bad because it impels believers to do harmful things. The New Atheists employ an evolutionary psychology model to explain why all societies and most individuals embrace religion of one form or another, but see religion’s effect as an unfortunate and maladaptive by-product of our mental apparatus that, unlike most evolutionary products, makes us worse off, not better off.

Haidt critiques that view as overly simplistic and as simply irreconcilable with emerging empirical data. Group selection is the key concept: Religion enhances bonding or belonging in communities and societies, and regulates social life. Religious communities and societies (so the theory goes) are more efficient and outcompete communities without a religion. So religion is a positive force in society, not a negative or harmful feature as argued by the New Atheists. Among other studies, Haidt discusses the Putnam and Campbell data showing that religious people are more generous and more charitable, and not only toward their fellow-believers:


By many different measures religiously observant Americans are better neighbors and better citizens than secular Americans — they are more generous with their time and money, especially in helping the needy, and they are more active in community life.

[The quotation is from Putnam and Cambell’s American Grace, p. 461.] While not an endorsement of the truth claims of any or all religions or denominations, Haidt’s chapter is at least an effective critique of the New Atheists. Here is Haidt’s pithy commentary and prognosis about the social effects of widespread unbelief; it almost sounds like something you’d hear in General Conference.


Societies that forego the exoskeleton of religion should reflect carefully on what will happen to them over several generations. We don’t really know, because the first atheistic societies have only emerged in Europe in the last few decades. They are the least efficient societies ever known at turning resources (of which they have a lot) into offspring (of which they have few).

Here are a couple of Mo apps that pop out of Haidt’s discussion of religion. First, religion is much more than simply a set of beliefs about God (or gods) and the world. There are nontheistic religions. There are nonmoralistic religions. [See this prior post for discussion of the experiential, mythic, ritual, and ethical dimensions of religion.] Mormonism seems to offer a much thicker religious experience than its Protestant cousins — there’s just more meat in the Mormon religious sandwich. Haidt’s discussion helps remind us that religion is about a lot more than just a set of beliefs about God and the world. This might be a clue why Mormonism has been, on the whole, so successful since its inception in 1830, despite having an underdeveloped and sometimes simply incoherent theology.

Second, there is a tension in the Mormon psyche between seeing religion in general as a good thing, which leads us to cooperate with other denominations and say nice things about other religions, and seeing other religions and denominations as false and apostate institutions and belief systems, which comes from the One True Church doctrine. Seems like over the last twenty years we’ve been moving from the One True Church end of the spectrum toward the All Religions Are Good side. Some people advocate religious cooperation from strictly political motives, but Haidt’s analysis gives a broader social rationale for that approach. We’re not just on Team Mormon, we’re on Team Christianity and maybe even on Team Religion. Go team.

← Internet Radio and the Church
An Un-natural ‘Natural’ →

14 comments for “You and Your Righteous Religious Mind”