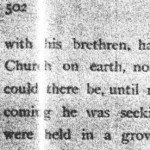 In Ensign articles and in General Conference addresses, it is not unusual to find appeals to people before 1830 who thought that Christianity had slipped into general apostasy. One of the most prominent of these is Roger Williams (1603-1683), to whom the following statement is attributed.

There is no regularly constituted church on earth, nor any person qualified to administer any church ordinances; nor can there be until new apostles are sent by the Great Head of the Church for whose coming I am seeking.

The source for this citation is nearly always identified as Picturesque America (1872) by William Cullen Bryant (1794-1878). This is somewhat troubling, as we usually prefer not to rely on nineteenth-century picture books to document statements made over two hundred years before they were published, even if the picture books were edited by famous poets. Can we find a better source?

If you can find a copy of the first edition of Picturesque America (the passage is missing in later revised editions), you will indeed find a quotation from Roger Williams on pages 500-2:

Mr. Williams, however, continued to be [pastor of Providence’s first Baptist congregation] for only four years, when he withdrew, not only from his official relations, but also ceased any longer to worship with his brethren, having come to the conclusion that there is “no regularly-constituted Church on earth, nor any person authorized to administer any Church ordinance; nor could there be, until new apostles were sent by the great Head of the Church, for whose coming he was seeking.”(Bryant 502)

Bryant is quoting Williams from somewhere – but he doesn’t indicate the source. Are we stuck?

Thanks to Google Books, no. A bit of searching shows that Bryant was quoting from what was for its time a quite reliable source: William R. Staples’s Annals of the Town of Providence (1843). Staples writes:

A letter of Richard Scott appended to “A New England Fire-Brand Quenched,” and published about 1673, states that Mr. Williams left the Baptists and turned Seeker, a few months after he was baptized. Mr. Scott was a member of the Baptist church for some time, but at the date of this letter, had united with the Friends. According to Mr. Williams’ new views as a Seeker, there was no regularly constituted church on earth, nor any person authorized to administer any church ordinance, nor could there be, until new apostles should be sent by the Great Head of the church, for whose coming he was seeking.(Staples 409)

This sounds promising – if we can find the letter of Richard Scott, we should find our quotation from Roger Williams. Three editions of George Fox’s A New England Fire-Brand Quenched were published in 1678 and 1679, all of which contain a letter of Richard Scott. (If you have access to the Early English Books Online database, facsimiles are here , here, and here.) The letter begins

Concerning the Conversation and Carriage of this Man Roger Williams, I have been his Neighbour these 38. years: I have only been Absent in the time of the Wars with the Indians, till this present — I walked with him in the Baptists Way about 3 or 4 Months, but in that short time of his Standing I discerned, that he must have the Ordering of all their Affairs, or else there would be no Quiet Agreement amongst them. In which time he brake off from his Society, and declared at large the Ground and Reasons of it: That their Baptism could not be right, because It was not Administred by an Apostle. After that he set upon a Way of Seeking (with two or three of them, that had dissented with him) by way of Preaching and Praying; and there he continued a year or two, till Two of the Three left him.

That which took most with him, and was his Life, was, To get Honor amongst Men, especially amongst the Great Ones…

Scott’s letter does state that Roger Williams had left the Baptists and become a Seeker – but the quotation we are seeking is nowhere to be found. What has gone wrong?

The genesis of this particular quotation involves a cascade of errors involving at least three people over four decades. I believe the process worked like this: In 1843, William Staples wanted to show that Roger Williams had become a Seeker only after leaving Massachusetts in 1636, and so he referred, accurately, to Scott’s letter. In order to explain Seeker beliefs, Staples provided a quick summary of what Roger Williams must have believed in order for a contemporary to refer to him as a seeker. Unfortunately, Staples did not clearly distinguish between his explanation, Roger Williams’s own statements, and Richard Scott’s report made decades after the events Scott describes. William Staples is the unwitting primary author of what has become among Mormons the most famous and oft-quoted statement of Roger Williams.

William Cullen Bryant was not the first to start moving Staples’s words into Williams’s mouth. An unsigned review of two biographies of Roger Williams in The Christian Observatory 1 (1847: 188) places the statement in quotation marks without attributing it to Staples, just as Bryant would do in 1872. But it was Picturesque America rather than The Christian Observatory that was the path for the quotation’s entry into Mormon discourse.

Around 1882, John H. Morgan’s first missionary tract for the Southern States Mission, Doctrines of the Church of Jesus Christ of Latter-day Saints: Its Faith and Teachings, discovered the quotation and made it known to Mormon readers. Morgan seems to have noticed the incongruity of Williams seeming to speak about himself in the third person, as this version, while citing Picturesque America, improves upon the quotation by making it a first-person statement in the present tense, rather than a third-person, past-tense statement. Note the discrepancies in bold below:

Already in 1882, Matthias Cowley excerpted the quotation, now attributed directly to Williams, in a short article for the MIA Contributor, and it was soon found in Mormon literature by B.H. Roberts and many others.(Cowley 240; Roberts 205)

The quotation of Staples-as-Williams continues to be repeated by Mormon scholars and church leaders in its particularly Mormon form, although someone should have noticed that the quotation was untraceable, and that the language doesn’t belong to the seventeenth century. And in fact, at some point, someone must have realized that something was amiss and made an effort to find the original quotation. A 2006 conference address by James E. Faust, for example, gives the quotation in Bryant’s formulation and accurately treats it as a statement about Williams. Jeffrey Holland’s 2004 conference address “Prophets, Seers, and Revelators” cites—correctly, although requiring a great deal of editing—a different statement made by Cotton Mather, one of Williams’s bitter opponents, about Roger Williams in an 1853 edition of Mather’s religious history, Magnalia Christi Americana. (Curiously, Robert Millet cites this address of Holland’s in reference to the LDS version of the Staples-as-Williams quotation in his 2010 book By What Authority? [Millet 121 n. 33])

To sum up, it would be best not to treat the passage in question as a quotation made by Roger Williams, and to cite William Staples rather than Willam Cullen Bryant as the source when using it as a statement about Williams.

Does this mean that another faith-promoting rumor bites the dust? Not so fast. It’s important to recognize that at no point did anyone misrepresent beliefs that Roger Williams held during his lifetime. As W. Clark Gilpin writes,

In this manner, Williams strongly contrasted the church of his own day, a church scattered in the wilderness, with Christianity in its authentic form. He believed that the glorious church of the latter days would bring the godly out of the wilderness by repristinating the doctrine, discipline, and spiritual authority of ancient, apostolic Christianity. This primitivism constituted a characteristic emphasis of his piety; the goal of God’s providential plan for his church was the precise restoration of its original pattern, and Williams now awaited the apostles whose preaching would bring that plan to realization.(Gilpin 59)

Gilpin documents this and similar statements about Williams with numerous references to Williams’s own writings. One thing that allowed the misquoted quotation to stay in circulation so long is that it does accurately reflect what Williams believed, even if Williams never conveniently put those beliefs together in a single memorable sentence.

The genesis of the Staples-as-Williams quotation is also significant because it illustrates how faith-promoting stories are generated. Everyone in the chain of transmission, from Staples to Bryant to Morgan, reproduced the quotation in good faith and according to the best of his abilities using the best sources available to him. Staples merely added a helpful sentence to explain what Williams, as a Seeker, must have believed. Bryant put into quotation marks material that he was quoting from Staples. And Morgan updated the language to reflect what he thought the original first-person quotation must have been. We are not smarter than Staples or Bryant or Morgan. Like them, we make use of the best sources we can find, but we have been blessed to come forth in the day of Google Books and HathiTrust.

When we come across a faith-promoting text that seems hardly credible, it’s tempting to cry “forgery!” and assume that some conscious dishonesty has been at work. Undoubtedly that sometimes does happen, but not nearly as often as we suspect. We don’t have to assume a conniving CES instructor or a scheming missionary in order to account for a textual intervention. What at first seems like a wild invention would often be revealed as the product of a series of gradual improvements made in good faith if only so much of the textual record had not been lost.

The generation of a quote by Roger Williams does not reflect some particularly Mormon flaw. Extracting, explanatory expansion, media transfer, and exposure to linguistic and historical changes create gaps that people fill with meaning. The things that created the quotation are universal processes that affect every human act of textual production.

One of the problems with pseudoquotations, of course, is that they too easily become roadblocks that prevent deeper engagement with authentic texts: Why bother reading the long polemical writings of Roger Williams when it’s quicker and easier to repeat a familiar sentence? But excessive skepticism is equally pernicious, because it can prevent us from accepting the possibility that someone who lived nearly four centuries ago had some things to say that resonate with us today in a particularly Mormon way. But Roger Williams and other Seekers really are our spiritual ancestors, and we should be reading their authentic works and grappling with them in their complexity.

Staples, William R. Annals of the Town of Providence, from Its First Settlement, to the Organization of the City Government, in June, 1832. Rhode Island Historical Society Collections 5. Providence: Knowles and Vose, 1843.

← A Mormon and an Evangelical in Conversation: Idaho Falls Edition
Establishing a Christian Nation? Tony Perkins and Military Bibles →

20 comments for ““For whose coming I am seeking”: Quote-unquote Roger Williams”