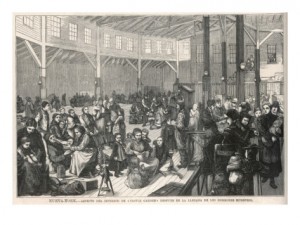 In the latter half of the 19th century, the principle role that New York City filled for Mormonism was as a transit point—more than 75,000 Mormon converts entered the United States through New York City during those years while several thousand missionaries sailed for Europe from New York’s port. But beginning with the Page Act in 1875 and the Chinese Exclusion Act of 1882, the U.S. began restricting immigration, beginning with Chinese and also including convicts, lunatics, and “others unable to care for themselves.” And in the late 1880s, attention on polygamy prosecution in Utah led to a provision of the Geary Act of 1892 which prohibited entry by polygamists. If you were restricted from immigrating, you were sent back.

Diaries of Mormon immigrants and Church immigration records reflect the antipathy towards Mormon immigration in the late 1880s. For example, when the Wyoming arrived on August 31, 1886 with 301 Mormon immigrants led by David Kunz among its passengers, the immigration agents scrutinized them carefully.  In his diary, Thomas Sleight complains about the way the agents treated the Mormons, recording that “Our company was much annoyed by the government officers detaining some of our company through spite.”

The official record of the voyage records a bigger difficulty:

“Forty-five of the emigrants were detained there by Commissioner Stephenson of pretended charges of pauperism, but finally all were permitted to continue their journey, except a woman and three children who were sent back to England. “

I assume that the charge of “pauperism” referred to the requirement under the 1882 Chinese Exclusion Act that immigrants be able to care for themselves. Of course, the Church’s immigration system cared for immigrants, at least until they reached Utah. I’m afraid I have no idea how well they received support after they reached Utah — but I suppose it depended on which ward they ended up in. But convincing the immigration agents that Mormons would not end up paupers in Utah was undoubtedly difficult.

I can’t imagine how the woman with three children who was sent back to England felt. I imagine it must have been extremely demoralizing, after working to get ready for the trip, hoping for a new home in Utah and traveling for 10 days on the Wyoming across the ocean. Today few immigrants have to face such difficulties.

I haven’t yet tried to figure out who this woman was was or what happened to her and her children. Why wasn’t she traveling with her husband? Was she a widow? Or was her husband an unbeliever? Did she try again later, perhaps obtaining enough cash and resources to convince the immigration authorities that she wouldn’t become a pauper? Did she stay in the Church?

Its hard to say how much of this antipathy was due to anti-Mormon sentiment, how much was simply antitpathy towards immigrants in general and how much was just bureaucrats enforcing a racist law (i.e. the Chinese Exclusion Act) that congress had passed. Undoubtedly all of these and more was involved.

Perhaps we can gain a more compassionate view of our disputes over immigration policy today if we put ourselves in the place of this woman and imagine what it must have felt like to be sent back.

[Comments on this post can be made on the Mormons in New York City blog.]