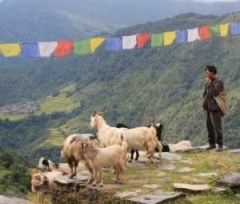 The Lord is my Goatherder, I don’t want him; he hauls me up the mountain; he drags me down to the beach. Surely we all recognize the 23rd Psalm there, from the infamous first translation into Tlingit. Sounds a bit off, doesn’t it?

This is the fourth of four categories explaining why translations differ (past posts). Translation is not a science, though it has begun to be studied like one. I have no expertise in translation theory, but I have studied a multitude of languages as well as the way translation theory crops up in discussing Bible translation. When I was younger, I thought other languages were basically a word-level substitution code. Those introduced to foreign language for the first time often fall in to this way of thinking, like my MTC pal who once offered “Il est à propos le temp!” Meaning to say, “Well it’s about time,” he simply took his English sentence, substituted those words in French, and came up with “It concerns the time!” (A propos has since made it’s way into English, meaning “relevant to the matter at hand.”)

Beginning with Eugene Nida (a linguist, Greek scholar, and editor of the Louw-Nida lexicon of Greek semantic domains), Bible translators today talk about two endpoints on the spectrum of translation theory. On one end is “word-for-word”, “formal equivalence” or “text-oriented” translation, which is more literal but potentially less understandable. The translator chooses to preserve more of the original language at the cost of being less accessible to the target language and culture. On the other end is “thought-for-thought,” “dynamic equivalence,” “functional equivalence” or “reader-oriented” translation, which is more understandable, but potentially less reliable. The translator does more interpreting in order to smooth and adapt to target language and culture.

For example, look at Isaiah 1:18, “though your sins be as scarlet, they shall be white as snow.” How do you translate “snow” for a culture in Africa that has no concept of it? “White as wool?” What if white is the color of death, not purity or sinlessness? If blue were the paradigmatic color, could you say “blue as the sky”? But the text says “white as snow”, so do you say “white as wool” and footnote saying “white symbolized purity for the Israelites”?… and so on. Essentially, is it the words that matter, or the concepts? How much can/must/should one deform the text to be true to and accurately convey the message of the text? Every translation is a traitor, goes the saying.

To the left, right, and in between these two points (word-for-word/formal and thought-for-thought translation) we have three more positions. More literal than formal equivalence is “literal,” between formal and dynamic is “mixed,” and even more translational and loose are “paraphrases.” Though every translation is likely a bit eclectic, you can assign translations to a particular category. See here for one among many charts showing translations along the spectrum. (None of the charts I’ve ever seen include the Jewish translations such as the JPS or NJPS.) So on the one extreme, Everett Fox’s The Five Books of Moses (recommended!) attempts to capture more of the flavor and rhythm of Hebrew, with the result that the English is sometimes odd. (Sample)

And on the other hand, paraphrases like The Message (not recommended!) sound too loose and casual, too shallow, perhaps even non-scriptural, e.g. “Our Father in heaven, Reveal who you are. Set the world right; Do what’s best— as above, so below. Keep us alive with three square meals. Keep us forgiven with you and forgiving others. Keep us safe from ourselves and the Devil. You’re in charge! You can do anything you want! You’re ablaze in beauty! Yes. Yes. Yes.” So goes the Lord’s Prayer. Wikipedia has some other comparisons.

The KJV is far towards the word-for-word/formal end of the spectrum; however, its target language was English of the 1500s. The instructions to 1) revise Tyndale’s NT (1526) and the Bishop’s Bible (1568) and 2) leave their text unchanged unless necessary, resulted in the KJV already sounding archaic when published in 1611. For example, -eth endings on verbs had dropped out of speech, and were pronounced as -s. Here’s a handout of mine on the KJV with references.

Translators often approach their work with a philosophical bent one way or the other before ever seeing the text to be translated. This means that even if two Bibles shared the exact same underlying text (category 1), and the translators understood the text the same way (category 2), and agreed on the meanings of particular words (category 3), the English could still come out looking fairly different. Translation is a tricky thing. Once you’ve resolved your textual issues (cat. 1), done all your parsing (cat.2) , and lexical issues (cat. 3), you know what it means in Hebrew, but still have to figure out what it should say in English. And this is something the average reader does not understand, that often times a translation gives no indication of the deliberate or unconscious choices made by the translator, or the fact that the Hebrew text in question may be terribly difficult to understand or fraught with textual issues, because a translator must say something.

In the next installment (which I promise will come faster than this one did), I’ll look at the original passages in question, apply these four categories to get under the surface, and post a few links and articles for further reading.

29 comments for “The Lord is My Goatherder, I Don’t Want Him: Why Translations Differ (Part 5)”