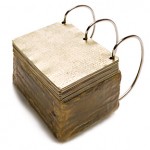 In the recently published Joseph Smith Histories, 1832-1844, as part of the Joseph Smith Papers, there is a note on page 321 that makes the following statement about the authorship of the three-witness statement:

The earliest copy of the testimony that follows is found in the printer’s manuscript of the Book of Mormon, in the handwriting of Oliver Cowdery. Cowdery likely was the author of the statement, given his writing abilities and similarities between the document and Cowdery’s 1829 correspondence to Joseph Smith and Hyrum Smith.

This statement assumes, first of all, that Joseph himself did not have the writing ability to author the three-witness statement – or perhaps more importantly, it excludes the possibility that Joseph could have received the three-witness statement as a revealed text. In addition, there are these purported similarities with Cowdery’s letter writing in 1829 (when he was serving as scribe for Joseph Smith), but unfortunately there are no actual examples given of these similarities, nor is there any reference to some independent research that has been done on this issue.

In looking at the actual language of the three-witness statement, it becomes very clear that nearly every phrasal and clausal expression can be found within the Book of Mormon text itself. In fact, many are virtually identical. Moreover, the closest instances of similarity in usage are found throughout the text, not congregated in one section. Eight of the similarities come from two places in the text where the three witnesses are referred to (in 2 Nephi 27 and Ether 5). Yet the clear majority of similarities are found scattered throughout the text.

There are only three expressions that appear to be unique to the three-witness statement –  namely, two third-person imperative phrases (“be it known” and “the honor be”) plus the noun phrase “the engravings thereon” (the noun honor and the adverbial thereon do occur in the text). The evidence is overwhelming that the language in the three-witness statement is no different in kind from the Book of Mormon language. I would argue that all these specific parallels show that the source for the English-language translation of the Book of Mormon is also the source for the three-witness statement. In other words, it was most likely revealed word for word to Joseph Smith, just like the book itself.

“the testimony of three witnesses”

“and we also know that they have been translated”

“by the gift and power of God”

“for his voice hath declared it unto us”

“wherefore we know of a surety that the work is true”

“and we declare with words of soberness”

“that an angel of God came down from heaven”

“and he brought and laid before our eyes”

“that we beheld and saw the plates and the engravings thereon”

“that we beheld and bare record that these things are true”

“and it is marvelous in our eyes”

“nevertheless the voice of the Lord commanded us”

“that we should bear record of it”

“wherefore to be obedient unto the commandments of God”

“and we know that if we are faithful in Christ”

“we shall rid our garments of the blood of all men”

“and be found spotless before the judgment seat of Christ”

Royal Skousen is editor of the Book of Mormon Critical Text Project and professor of linguistics and English language at Brigham Young University.

11 comments for “Who authored the three-witness statement?”