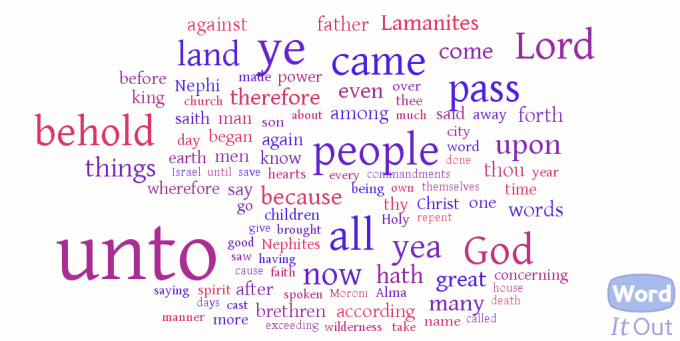 I’ve been curious what a word cloud of the Book of Mormon would look like, so , just for fun on a Friday, I finally made one. I don’t have a lot to say about it, other than that “unto” seems to be a very popular word (which doesn’t really surprise me, but I didn’t expect, either). “Lamanite” shows up more than “Nephite,” though the usage of both is dwarfed by “people.”

I took the text from the 1830 edition of the Book of Mormon, and I copied it from here, and I made the cloud using WordItOut.

(Note that I actually prefer the look of the Wordle cloud, but I couldn’t get it in the post at a decent size. That said, I’ve included it below.)

Ardis pointed out that, in many ways, the word cloud would be more useful if some of the dull words came out (really, other than an interesting look at word choice, having “unto” as the biggest word doesn’t tell us anything interesting about the themes of the Book of Mormon). So, in the interest of a more telling word cloud, I’ve run it again, taking 11 words out. And, thematically, I think it is a better representation of the Book of Mormon. So below is the Book of Mormon word cloud without unto, ye, came, pass, yea, even, thou, thy, saith, said, or thee: 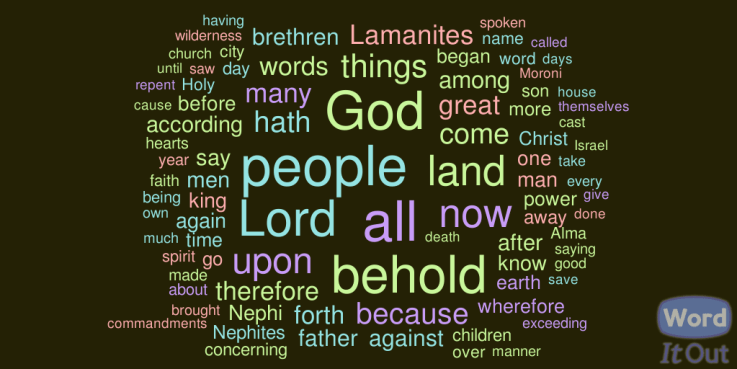