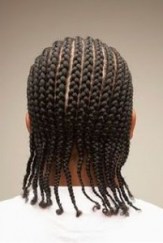 The bishop told Amadou he would not be allowed to attend EFY unless the braids were cut.

Amadou comes from Mali. His family settled here a few years ago and became members of the Church.

Wearing cornrows and braids is a common hairstyle among African men. It has existed for centuries and the patterns used to identify ethnicities as well as social status. Today, for many boys and men of African descent outside of Africa, it is still a form of ethnic affirmation and cultural belonging. The bishop claims to have no choice but to enforce the EFY guidelines: “no ponytails, pigtails, braids, designs, carvings (including Mohawks) or completely shaved heads.” Also, allowing one boy with braids could create tensions as other participants did change their hairstyle to conform to the norms. Amadou could also be sent back, right at registration, and be obliged to travel the 100 miles back home.

Amadou struggles over his braids and his identity. He may decide not to go to EFY. And, as we have seen with other youth in similar cases, he may not remain active in the Church.

70 comments for “EFY, hair, and culture”