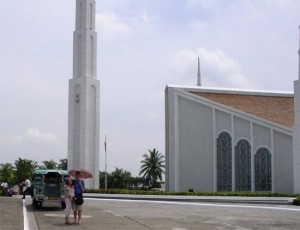 With Baby and Umbrella at the Manila Temple

One of the things almost sure to be heard in testimony meeting after someone has traveled (whether it’s across the ocean or just to the next town over) is an expression of gratitude that “the Church is the same no matter where you go.” To a certain extent, it’s true. We all sing the same hymns, although every ward congregation seems to have its particular favorites. We all read the same scriptures. Sunday meetings follow the same general format, even if the meetings are in a different order. Thanks to Correlation, Sunday School and other lesson manuals are standardized and translated into over a hundred languages, and on any given Sunday the whole worldwide Church is studying the same lesson (give or take a week or two depending on how organized the local Sunday School teacher happens to be).

We’ve traveled and moved around the world quite a bit, and I’ll admit that I do appreciate the general “sameness” of Church meetings. It’s nice for my children (and for me!) to know that no matter how different the country where we live may be, when we go to Church it will feel familiar. But I also deeply relish the little differences. For example, in Italy when I arrived at Church I was greeted not with a handshake, but with kisses on both cheeks (and sometimes the top of my head too). There is nothing like being kissed thirty times in a row as you walk in the door to really make you feel welcome.

Among my favorite things about attending church in a foreign place is meeting new and different people with whom I nevertheless share many things in common. Church members are always some of my first friends in a new place. And you don’t always meet the people you would expect. Our branch in northern Italy naturally had some Italians in it. But many of the members there were from Argentina, so while Italian was the official language spoken from the pulpit, there was a lot of Spanish floating around in the halls. We also had some members from Nigeria, with whom I conversed in mutually broken Italian for several weeks. Finally one day we laughed in embarrassment and relief when we all experienced the sudden simultaneous epiphany that we were attempting to speak a foreign language with a native English speaker.

Testimony meeting in our Irish branch was a luscious bouquet of accents. There were Irish members from various cities, someone from Latvia, South Africans in both vanilla and chocolate skin tones, a cute little family from France, a missionary from the English Midlands, and then us. The missionaries had a hard time convincing one young black South African man to come back to church, because he was afraid the white members would shun him. When he finally came one Sunday, my heart was touched to see our white South African family be the first to go up and introduce themselves to him, and then invite him to sit with them. From then on, he was taken in as one of them, and sat with them every week, enveloped in the love of their family.

Baptism at an Irish Lough

Our branch in Florence may have been even more eclectic, although it varied a lot from week to week, since many worshippers were tourists just passing through. One sweet woman in the branch really took us under her wing, although we were only there for a couple of months. She was from Peru, and had lovely thick black hair and a dark complexion. Her husband could not have looked more different. He was from somewhere in Eastern Europe, and his ruddy face was crowned with a profusion of curly blond hair. I loved the fact that they had both come so far from their native lands only to meet each other in this Italian melting pot and fall in love.

Aside from the obvious surface differences, another fun aspect of Church in different places is the subject matter of Sunday School discussions. General topics like faith, following Jesus, and loving our neighbor, come up everywhere, of course. Lessons on the Word of Wisdom typically revolve around alcohol, smoking, or coffee. In our Filipino Sunday School class, however, we skipped discussing forbidden stimulants in favor of a heated debate on whether we should ever be eating meat at all, since in the Philippines it is never cold, and winter is just a distant fantasy that nobody has ever experienced.

In fact, Filipino Sunday School was always interesting, because they have a lovely cultural tradition of respect towards the elderly. Invariably, at some point in the lesson there would be a venerable old man (a little hard of hearing) with bizarre ideas on every subject, who would lecture until it was time for the closing prayer while the rest of the room sat in reverent silence. The ward we attended in Manila was a downtown one with many English speaking foreigners, and meetings were generally conducted in English. Somehow, though, whenever the speakers in Sacrament meeting told a joke, they thought the punch-line would be funnier in Tagalog. So I’d laugh along with the rest just to be sociable, and then lean over to ask my husband what I was laughing about.

Some of my most spiritual church meetings have been the simplest ones. There’s something about missing all the usual trappings of church that shows you the importance of what’s left without them. One of my favorite Sacrament Meetings ever happened when I was on a semester abroad in Syria. There were of course no local congregations, and our group of BYU students was on a long bus trip that Sunday, so we had Sacrament Meeting right there in the bus. I watched my friend Kyler walk down the aisle, swaying a little with the movement of the vehicle on the bumpy road. His hands were carefully cupped together around a little pile of broken bread, which he offered reverently to each of us in turn. Something about the expectant silence of the usually rowdy bus and the intimacy and humility of the bread coming straight from his hands to ours, touched me with strange profundity. It was as if we had turned the mundane world inside out for a moment and made it suddenly holy. The very incongruity of participating in the familiar ritual in such an unexpected place shocked me into really seeing it, as if for the very first time. I pictured the last supper, and Christ’s hands holding out the bread to each of his disciples in turn. It was a visual reminder of how personal his act of offering the Atonement is to each of us, and I’ve never forgotten it.

We spent most of last year in another country without the benefit of organized church presence: Tunisia. Just like in most Muslim countries, we were cautioned not to be too open about our church membership or meetings. We felt wonderfully blessed to find that there were a couple of other Mormon families in the country too. Every Sunday we took a taxi, then an hour-long bumpy, smelly, death-defying public minivan, and then another taxi to meet in the home of a member for a very simple church service. We would sing a hymn, watch a Conference talk, partake of the Sacrament from the smallest cups in our host’s cupboard, and then sit around in a circle for a Sunday school discussion while one adult rotated out to teach our tiny, five-child Primary.

Our meetings were held in Carthage, a well-heeled Tunis suburb built right on top of the ancient Carthaginian capital and its Roman successor. When we visited the nearby mosaic museum, we found this beautiful tiled baptismal font designed for immersion baptisms. St. Augustine lived and taught in Carthage, and many early Christians met martyr ends in the ruined Roman amphitheater just down the street from where we met for church. My favorite weeks there were our testimony meetings, where it was not a question of if you would bear your testimony, but when. Gathered together as a tiny band of believers in a country full of chaos and unrest, we poured out our hearts to one another and were spiritually strengthened. In those moments, I felt a powerful kinship with the ragged, persecuted members of the early Church, who must have also met secretly in private houses on those same Carthage streets, shared the Lord’s supper, and borne testimony to one another.

We’re back in a “normal” American ward now. We meet in a nice chapel with over a hundred other saints in a well-functioning ward with all the requisite auxiliaries and activities. It’s something I missed when we were away, and I love being back in the comfortable familiarity of American Mormondom. But sometimes, sitting in my cheerio-laced, padded pew, I close my eyes for a moment and imagine myself in one of those more far-flung places. Immersing myself in those distant scenes of worship, I touch a little more deeply the core of what it really means to be a Saint, and thank God for the experience of difference that illuminates the familiar with a rich new light.