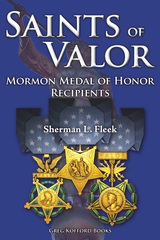 A couple of months ago I received a review copy of Saints of Valor: Mormon Medal of Honor Recipients (Greg Kofford Books, 2011; 430 pages in paperback | publisher’s page). I’m going to first discuss two issues related to war and Mormonism: (1) how Mormons serving in the military improve the public perception of Mormonism; and (2) the ambiguous position of Mormonism on participation in war versus pacificism. Then I will provide a short discussion of the book itself.

The willingness of LDS volunteers of the Mormon Battalion to serve in the US Army was largely forgotten by the nation in subsequent decades as Mormons in Utah came into conflict with the federal government. During the Utah War of 1857-58, Mormons took the field against US soldiers, although happily the conflict was resolved without actual combat between the opposing forces. Consequently, the patriotism of Mormons was very much in doubt in the second half of the 19th century. Participation by Latter-day Saints in the military was an important part of reversing that perception and helping pave the way for Utah statehood (in 1896) and normalization of Mormons in the political life of the nation (the first decades of the 20th century).

In her book The Politics of Religious Identity, Kathleen Flake recounts the 1905 testimony of Richard W. Young to the Senate’s Committee on Privileges and Elections as part of the committee’s hearings on the seating of Reed Smoot. Young was an 1882 graduate of West Point who then went on to graduate from Columbia Law School, serve as a military attorney and judge, then in later years to lead a US infantry brigade in France during World War I as a brigadier general. He was, it appears, a compelling witness for Smoot. Here is Flake’s commentary on Young:


Spanish-American War veteran Young provided important credentials to support Senator Smoot’s declaration of the church’s capacity to make good citizens and to act in defense of the nation’s interests.

A second point is that both support for military action and opposition to military action under the banner of pacifism fit under the broad umbrella of Mormonism. From one extended episode in the Book of Mormon one can draw support for either view: young stripling warriors march off to war under the command of Helaman while their fathers refuse to take up arms in defense. D. Michael Quinn has, at various times, made the historical case for Mormon pacifism (that it existed) and supported it as a live option for present-day Mormons. I’m making this point to head off those who might object to Saints of Valor as somehow arguing for Mormon militarism. The book doesn’t make that argument or directly discuss militarism or pacifism. In the introduction the author does, however, give a pleasantly broad definition of heroism:


Heroes are individuals who willingly risk their lives in an act of bravery to save comrades and fulfill a mission. Police and firemen also share this distinction. Heroes can also be any citizen who, at the risk of his or her own life, attempts to save others in danger. Some heroes have paid the ultimate price by sacrificing their own lives on the altar of freedom, selfless sacrifice, and devotion to duty. These are true heroes.

Now on to the main topic. The book offers short biographies of the nine LDS men who have received the Congressional Medal of Honor, as well as detailed descriptions of the their actions in the military engagement that gave rise to the award. There are also short historical sections like the six-page “Introduction to World War II,” which to me seems like a war that needs no introduction, but schools just aren’t what they used to be. Much of the narrative is written in the style of military history, with careful attention to unit designations, rank, and the details of deployment in engagements. That’s no surprise: the author, Sherman L. Fleek, a Latter-day Saint, is a military historian presently serving as the Command Historian at West Point. The military history style might be unfamiliar or even unwelcome to some, but it does not overshadow the human interest plot of each chapter: how average men acted with courage and bravery in the particular difficult and deadly circumstances they and their brothers in arms encountered.

To give a better idea what the book covers, let me just summarize a couple of the five medal winners from the World War II section. Captain Mervyn Sharp Bennion was the captain of the battleship West Virginia on the morning of Sunday December 7, 1941. You may have heard the name before, and he was portrayed (somewhat inaccurately) in a scene of the movie Pearl Harbor. After having dinner with the president of the Oahu Stake on Saturday evening, he returned to the ship and was thus onboard the next morning. The battleships were docked in pairs, and the West Virginia was on the outside of the Tennessee. Shortly after attacking aircraft were spotted and Bennion called sailors to battle stations, at least three torpedoes ripped into the side of the West Virginia. Shortly thereafter, a dive bomber hit the adjoining Tennessee, and shrapnel from the blast raked the West Virginia. Bennion took a hit in the abdomen, which left him bleeding, paralyzed, and in great pain, but still conscious and in command. He ordered the counter-flooding that prevented the stricken ship from capsizing. During the ordeal, Bennion was attended by various sailors and junior officers, including Doris Miller, an African American sailor who received the Navy Cross for his conduct during the attack (played by Cuba Gooding, Jr., in the movie Pearl Harbor). Captain Bennion remained on the ship throughout the attack. He expired on the navigation bridge at about ten o’clock, two hours after the attack began.

Private First Class Leonard C. Brostrom was the only one of the nine medal recipients to serve an LDS mission. Military service displaced missions for some young men during this period, and, as Fleek notes, “missionary service prior to this time was not stressed vigorously by Church leaders.” Brostrom grew up in Preston, Idaho. After graduating from high school in 1938, he served an LDS mission in California and Nevada from 1939 to early 1942. Likely drafted, he was assigned to the distinguished 7th Infantry Division for service in the Pacific. Brostrom and the 7th saw action in the Aleutian Islands in 1943; Kwajalein Atoll in the Marshall Islands in early 1944; and the Philippines in late 1944, where Brostrom and his regiment went ashore near the town of Dulag on Leyte. They encountered resistance as they moved inland; on October 28 they came under fire from entrenched guns as they moved through a swamp. Additional units were moved forward to assist as the soldiers struggled to take out the opposing guns without tank support (which could not negotiate the swampy terrain). Late in the day, Brostrom single-handedly attacked an enemy position that was firing on his unit, first repelling six enemy infantry who emerged from a trench, then hurling grenades into a fortified bunker and forcing out the defenders. Seriously wounded during the attack and losing blood, Brostrom died as he was being hauled to the rear on a stretcher.

The details of Leonard Brostrom’s life and service in the Army are actually rather spotty: he did not survive to give a personal account, there were no surviving family members to provide additional details to the author, and there were few documentary records to consult. To me, he sort of stands for all those who, when young, sacrifice to serve in the military or on missions but do not return to live out the balance of a promising life. I have attended a missionary funeral, a mixture of sadness, regret, admiration, and pride. We who do live out a full life, whether or not we have served in either capacity, at least ought to take notice of those who did not return and give them our regards. Leonard Brostrom served an LDS mission, fought for his country, and died courageously in battle on October 28, 1944. In late 2011, Brostrom’s medal of honor was donated to the LDS Church History Library.

Saints of Valor is half LDS biography and half military history. If you’ve traveled a bit, certain sections in the book might jump out for you. I’ve been to Kwajalein and Majuro in the Marshalls and hiked up in the hills to see the old Japanese guns and fortifications on Pohnpei in the Carolines. When Fleek wrote that, apart from energetic defenders stationed on various Pacific islands, “the daunting terrain of knife-like ridges, jungles, and tropical diseases were major threats,” I can relate. It’s not for everyone, but there’s probably someone in your extended family who wouldn’t touch a Mormon Studies book but would enjoy Saints of Valor.

10 comments for “In Harm’s Way: Review of Saints of Valor”