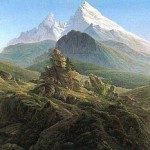 Heinrich von Ofterdingen by Novalis is one of the founding documents of Romanticism. The novel is perhaps most famous for the title figure’s vision of a blue flower in the first chapter. What is not as well known is how Heinrich’s family drama is also the ecclesiology of Mormonism. After Heinrich wakes from his vision, his father reacts skeptically, using language that is uncannily familiar. Heinrich mentions that he has seen a vision in a dream, but Heinrich’s father replies:

Dreams are fluff, whatever the scholars might think, and you would do well to keep your mind off of such useless and harmful ideas. The times when divine visions were the companions of dreams have passed, and we cannot and will never comprehend how it was for those elect men of whom the Bible tells. Dreams must have been of another kind at that time, as were human affairs.

In the age of the world in which we live, direct concourse with the heavens no longer takes place. The old histories and writings are now the only sources through which we receive knowledge of the supernatural world, inasmuch as we need it, and instead of those explicit revelations, the Holy Ghost now speaks indirectly to us through the understanding of intelligent men of good will and through the manner of life and the fates of pious people.

Some few days after I had this vision, I happened to be in company with one of the Methodist preachers, who was very active in the before mentioned religious excitement; and, conversing with him on the subject of religion, I took occasion to give him an account of the vision which I had had. I was greatly surprised at his behavior; he treated my communication not only lightly, but with great contempt, saying it was all of the devil, that there were no such things as visions or revelations in these days; that all such things had ceased with the apostles, and that there would never be any more of them.

The sequence of foundation – apostasy – restoration found in JS-History that is the foundational narrative of Mormonism is also found in Heinrich’s family history: His mother returns and reminds Heinrich’s father that he too had once had visionary dreams as a young man, and a flower had figured prominently in them, and that the flower may well have been blue.

Mormonism and Romanticism share an epistemology that sees the most important source of knowledge as direct contact with the divine. Another reason it’s probably not wrong to see a connection between Mormonism and Romanticism is that the founding texts of both movements regard their epistemological foundations as something that their predecessors and contemporaries had lost or denied.