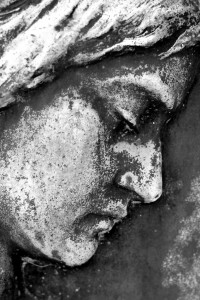 Like many Mormons, I grew up always knowing about Heavenly Mother, but never really talking about Her. And honestly, the relative absence of my Heavenly Mother didn’t ever bother me much. In fact, when I thought of Her at all, I thought of Her as a sort of special, beautiful secret, or an esoteric doctrine I found aesthetically pleasing. To me, She was more of an idea than a real person; certainly She didn’t seem as “real” as God the Father or Jesus Christ, whom I heard about every week at church, and with whom I was encouraged to develop a personal relationship.

Fast forward to approximately a year ago. We’d had a serious marital shakeup, then a couple of difficult financial years, and several international moves. I was emotionally and physically exhausted. What I really needed was to drop off the face of the earth for a sabbatical on some sun-drenched desert island. So we did the next best thing. Since we were already on that side of the world, and it was the closest reasonable approximation to otherworldly escape, we moved to a sleepy beach town in the balmy little North African nation of Tunisia. And for the next few months, every morning I would walk down to the beautiful Hammamet beach, sit on the shore above the waterline, look out at the brilliantly blue sea and sky, and just be still.

After a while, I started to bring along a notebook so I could set down my feelings and try to sort through them. And then one day I began to write poetry. Poetry has always been both cathartic and enlightening for me. In a philosophy class once, my professor explained that the Greeks believed poets had a kind of madness sent from the gods, which enabled them to write things that they did not know or understand themselves. That made sense to me, since I find that reading my own poems is essentially a similar experience to reading other people’s. The oddest, and sometimes the most profound things pop up in poetry without ever passing through the conscious mind.

Much of the poetry I began to write on the beach in Hammamet dwelt on religious and Biblical (or Book of Mormon) themes. Among others, I wrote about Eve, Mary, Jesus, Noah, Lehi, and Sarah (with whom, for obvious reasons, I’ve always felt a kinship). I explored how their struggles and triumphs mirrored and illuminated mine, and found solace and understanding in their stories. And then one day it happened. Heavenly Mother appeared in one of my poems.

After I’d written it down, and then polished up the rhyme, meter, and internal assonance and consonance till every word was perfect, I just sat and stared at it. There She was, unaccountably, but undeniably. I hadn’t set out to write a poem about Her. She had just appeared, unbidden, like a rare pearl unexpectedly washed up on the sand at my feet.

It was a strange experience for me. The absence of discussion about Heavenly Mother at church is nearly absolute, and many members believe the subject to be actually taboo. I felt I’d done something unwittingly subversive. I mean, we have this one hymn we sometimes sing (called, ironically, O My Father) that mentions Her, and occasionally a speaker in Conference will throw out the phrase “heavenly parents.” But a cursory search for “heavenly mother” on lds.org yields exactly 16 results. For perspective, a similar search for “heavenly father” comes up with 14,625.

This is the climate I was raised in, and I think it’s a fairly typical experience for Mormons. Who writes poems about Heavenly Mother? Those edgy people who run Sunstone Magazine, and complain that women never pray in General Conference, and agitate for the removal of the “gender ban” on the Priesthood, that’s who. Not I.

But somehow, I had done it. And I hadn’t just done it. I had read it, and I had felt it, and there She was, no longer just an idea, but suddenly as disconcertingly real as God the Father, as if She had somehow breathed life into Herself.

That first poem was like the opening of a floodgate. It was followed by several more, and then by a ravenous quest to learn more about Her, and find a place for Her in my mind and heart. I didn’t quite realize it then, but my life changed that day, on the beach under the sun with my notebook open on the sand. My eyes were opened to a ravishing new world.

Ten years ago, I spent a year and a half as a missionary doing nothing but teaching people about God, and watching them awaken to the delight of knowing Him. But I never knew how it felt to really yearn and wonder if God was there, until the truth sank deep into my heart that “God” means not only my much-loved Father, but also a Mother I was only beginning to know. That awakening has been the beginning of a journey that has changed not only the way I see God, but the way I see myself and everything else.

I talked of God to men who knew Him not,

Brave knees to bend, strong hands to clasp, and eyes

To close against the dark, rough voice to rise

A childlike passion kindled in the soul.

And I, who from my early, earnest days

Harked to His words, and walked in all His ways,

Talked with Him, told Him all my childish thought,

Poured forth my tender joys to Him, and brought

My sorrows to His feet, and left refreshed,

And never felt His lack, nor went unblessed,

I never ached or yearned for Heaven’s care

Until I learned I had a Mother there.